THE DEEP ONES: "The Demoniac Goat" by M.P. Dare

THE DEEP ONES: "The Demoniac Goat" by M.P. Dare

"The Demoniac Goat" by M.P. Dare

First published in Unholy Relics and Other Uncanny Tales (1947). 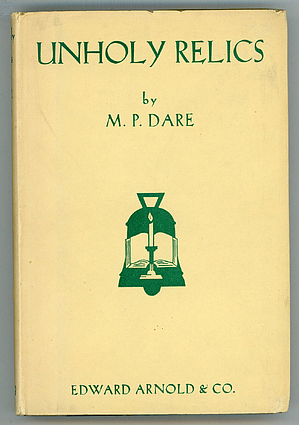 Unholy Relics and Other Uncanny Tales
The Shub-Niggurath Cycle: Tales of the Black Goat with a Thousand Young

ETA Interestingly, both the wikipedia article and the lovecraft-stories wiki omit M.P. Dare from the list of "other writers" making mention of Shub-Niggurath.

I'm not sure Dare does mention Shub-Niggurath. It looks like the "goat god" theming was the main motive for the story's inclusion in Price's Shub-Niggurath Cycle collection. Price compares Dare's work more to that of M.R. James than that of Lovecraft.

I enjoyed this combination of satanic and folk horror. Even the cynical and slightly sardonic commentary (I chuckled at a couple points) by Gregs doesn't lessen the sudden surge of horror when Tudor is discovered kissing the goat's arse on the alter during an attempted human sacrifice. Rev. Tudor and Asmodeus the goat reminded me very much of the kind of villainous characters that John the wanderer would encounter in the Appalachian mountains just a few years later in Manly Wade Wellman's stories.

And how could I not think of the ultimate in evil goats:

I thought emphasizing the stink of the goat was a very effective way to cultivate the horror.

Dare presents a little world that is, aside from one misogynistic comment, completely devoid of women. It's funny that the "Apostles," whose superiority to women is so remarked, end up in just the role that an imperiled girl would, according to pulp adventure conventions.

I thought for sure it would be this one.

I enjoyed the tale enough to be curious about Dare's Unholy Relics, but wasn't terribly impressed with the storytelling itself. Overall it was as though Dare had good ideas but wasn't able to integrate them into the story naturally, and so simply had a character tell us. The clerical collar being fashioned of human skin is perhaps the worst offense, but there's a good deal of telling rather than showing throughout the story.

The story's setting and plot were original enough, though, that I'm interested in trying again.

I agree that the style was a little clunky, but largely overshadowed by the subject matter. I wondered if Price's comparison of Dare to M.R. James didn't redound unreasonably to Dare's disadvantage.

I can't quite find the word to describe M P Dare's storytelling style. It's not pulp, it feels too English for that (even looking back to the Edwardian era) but it is naive. You could almost say it sounds like a story written for schoolboys (apart from certain details like the osculum infame). Anyway, it had an unsophisticated vigour that was a nice change of pace but sort of throwaway and probably not worth rereading.

The John the Balladeer/ Silver John resemblances aren't something I picked up on, although now KentonSem has pointed them out I can see them. I was focusing more on the style of the storytelling and the characters, which led to to thinking of childrens' adventure fiction (Bulldog Drummond, Sexton Blake, Dick Barton: Special Agent (that one originated on radio)). However, I think Dennis Wheatley is probably at least a big an influence. His novels are themselves adventure stories featuring heroic "chaps" and the goat of mendes actually appears in The Devil Rides Out and an evil clergyman in To the Devil, a Daughter.

Ah, Wheatley is a good comparison! The only novel of his I've read is The Satanist.

Gompers is at the very least the next in line for ultimate evil goat. My daughter and I love Gravity Falls!

I enjoyed this one. I mean it's got a demonic goat and a clergyman back from Hell.

Still, I thought it had a couple of weak points. The title undercuts some suspense. The narrator's sudden intuition upon waking up on Midsummer's Day was a bit implausible or, at least, Dare didn't lay enough groundwork for it -- at least for me.

>8 elenchus: Yes, why does a leather collar look like a soiled clerical collar which, as far as I know, are made of cloth?

I think human skin can be made into something more like vellum than leather. That's what I imagined while reading the story, anyway.

The collar is made of celluloid, so it's presumably white and shiny (or would be if clean), with the human skin hidden inside - laminated inside , or the two layers glued together. I suppose the latter is more likely given how quickly the narrator spots it.