THE DEEP ONES: "The Sect of the Idiot" by Thomas Ligotti

THE DEEP ONES: "The Sect of the Idiot" by Thomas Ligotti

"The Sect of the Idiot" by Thomas Ligotti 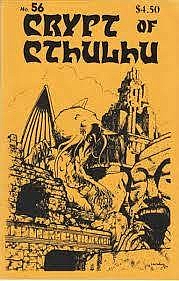 Songs of a Dead Dreamer
The Azathoth Cycle: Tales of the Blind Idiot God
Lovecraft's Monsters
The Red Brain: Great Tales of the Cthulhu Mythos

I've be reading this in the Penguin Classics combined Songs of a Dead Dreamer and Grimscribe.

I might actually have that issue of Crypt of Cthulhu squirreled away somewhere, but I read from Songs of a Dead Dreamer and Grimscribe myself.

Other than the epigram, there's no explicit Yog-Sothothery involving proper names in this story. There are no proper names at all, in fact, which I think contributes strongly to Ligotti's style. But the leveraging of tropes, motifs, and themes from HPL couldn't be more pervasive. Here are some of the stories that I see reflected in "The Sect of the Idiot":

"The Outsider" - revelation of the speaker's deformity
"The Shadow Over Innsmouth" - anticipation of loss of humanity, transition to new realms
"The Whisperer in Darkness" - inhuman entities poorly disguised as humans
"The Music of Erich Zann" - a "high room" and its enclosing cityscape
"The Dreams in the Witch House" - dream conference with superhuman powers

I'm sure there are many others.

A feature that doesn't seem derivative from HPL, and which seemed effective to me, was the "little man" and his transformation.

I haven't read the Penguin book yet but I have read Ligotti - somehow my local bookshop got hold of a couple of Cold Spring Press soft back volumes, a Ligotti collection and Lovecraft's favourite stories. That, and discovering Tartarus Press, is really what launched me into Weird fiction in a big way.

So I was aware of his reputation as a successor to Lovecraft, a very big figure in late 20th century weird/horror writing etc., and had encountered some of his stories: dark, often surreal, never offering any hope (that's the impression in my mind some 12 or so years later).

I understand from leafing through the Penguin's introduction that Lovecraft's influence is more noticeable in early stories like this one, even while Ligotti was recognised from the off as a major talent with a distinctive voice.

The general situation does echo Lovecraft - @paradoxalpha has picked out some specific elements. More generally it feels "Lovecratian" without needing to lean on specific plot points or imagery - like "Dickensian". The rather formal narrative voice also conjures up Lovecraft without explicitly trying to imitate him.

When I wrote about the Fritz Leiber story I was thinking about stories that play on, what I suspect are, very deep primal fears of making oneself known to "powers", whatever they might be, and coming to harm. It's sort of the same thing here although if the protagonist did anything to lay himself open to attack, it's impossible to see what it might have been, This is either random or income way preordained, perhaps. either way it couldn't be avoided.

I finished this Ligotti story in a similar frame of mind as when I've finished others of his: wanting to like it more than I did. I usually like abstract stories and those with a philosophical bent, intentional or no. For whatever reason, Ligotti seems to tick all the boxes but not come together for me.

In my case, an audio reading doesn't suit the material, taking me out of the mindset. On my second listen-through, I tried the closed captioning, but it's imprecise and missing punctuation, pulling me out in a different way.

Overall I was struck by the analogue between sentient life in a material universe, and the story's setting. The plot wasn't particularly relevant, though I tried to pay more attention the second time as I wasn't certain.

Most of all I liked some of his imagery: the cubes, not solid as first thought but glass containers full to brim with some gelid substance (I thought of human bodies); the chairs like insects (I thought of Giger's storyboards for Alien). Some phrases were provocative: the passage which ended with reference to "enlightened zombies" (around 13:50 in the audiobook) the highlight for me.

I conclude that I shouldn't approach Ligotti as a storyteller, not even one concerned especially with atmosphere. Perhaps if I read his work as a species of essay, I would get more from my reading.

Normally, I like Ligotti, but this one didn't do much for me.

I did like some of the visual elements like those odd chairs, and the city struck me as inspired by The Cabinet of Dr. Caligari.