"The Beautiful Gelreesh" by Jeffrey Ford 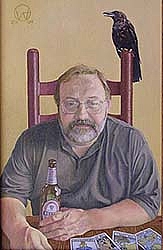 The Weird: A Compendium of Strange and Dark Stories
The Empire of Ice Cream

The inimitable The Weird for me, but likely not in time to start off the festivities.

Read I yesterday. I confess the end confused me - had the Gelreesh somehow exchanged places with the bird, thus avoiding execution? The description of the latter doesn't seem to allow for it.

I liked the matter-of-fact description of outlandish and horrifying events.

I liked this one.

The ending did puzzle me too.

I looked at it as a look on the downside of empathy. Gelreesh, a literal predator, uses it in weaponized form. And, possibly, he's deluded himself into thinking he's helping he's victim.

I liked how the beginning made Gelreesh seems bestial, but the effect quickly diminishes as the opening therapy session goes on. Until the suicide of the patient and Gelreesh eats their corpse. Then the initial impression comes back in force.

If Ford ever resolved the issue of Gelreesh's paternity, I missed it.

I've liked everything I've read by Ford this far, so I should perhaps get a collection or something. Though the usual objection applies; I've got too many half- or unread books already, and a wishlist a mile long.

My experience pretty much mirrored what's been mentioned. The dapper Gelreesh made for an interesting malefactor, and was Ford putting me on about his name coming from a brand of French cigarette? I know of the cliche'd Gitanes but couldn't find anything on Gelreesh, which made me think perhaps I'd fell for a joke.

The ending. I can't explain it, either, but it fit all the other escapes he'd made over the ages. Perhaps he didn't so much "swap places" as find a parrot skeleton as a snarky signature.

If pronounced with a hard 'g', Gelreesh does sound like it could be a French word or phrase mildly anglicized. My marginal French isn't up to think of something more plausible than gueule riche, meaning "rich mouth", however. I can't find that or anything else that or anything similar as the name of a cigarette brand when googling.

I read this in The Weird. i think I'd have to take issue with the Vandermeers' introduction. This didn't feel Decadent at all (and if it shares a sensibility with Belgian traditions of the weird I haven't encountered them yet). What I was quite strongly reminded of, was Angela Carter's short stories. The Gelreesh is not at all dissimilar to the various incarnations of a predatory Male Beast as encountered in the stories in The Bloody Chamber.

Mainly because the ending left me puzzled I looked online for views on this story. I found some, but not putting forward any convincing theories. I was surprised to see that some commentators saw a satire of Christianity in the Gelreesh. I had taken him to be a therapist figure rather than a kind cult leader or guru, far less a major religious figure (I'm talking about his outward pose here, his public face). There are similarities between the cult leader and the therapist, no question. There's an unequal power dynamic and potential for abuse in both sets of relationships.

The passage about his post-mortem fame did bring to mind recent reading (more exactly, podcast-listening) about the early spread of Christianity and the "truthiness" or otherwise of the Gospels and other early accounts, but this seemed to be more about the things in my head now, and not what was in Jeffrey Ford's.

What about that ending then? I'm not convinced that the owl skeleton does indicate the Gelreesh "got away". Not every fantasy story (perhaps this is particularly true of the weird tale) will have an "in-universe" justification for everything that occurs. I'm reminded of John W. Campbell, Jr editing Unknown and insisting that the stories he published did have to have such justifications, and the arguments that the resulting stories were simply more Astounding-style science fiction, but using a different set of physical laws.

Also Wilum Pugmire reminded us that authors don't necessarily know where their ideas come from.

The figure of an owl was there at the outset as some kind of pet or familiar, then - for no apparent reason - it changed to a grackle (not a native European species but North American..does that work against the vaguely fairly-tale timeless setting? I'm not sure.) Could the gelreesh have "really" been an owl all along, in some way? If it's so, I don't think anything in the story can explain it (or outside - the mythology of owls is rich but, looking across different cultures, pretty contradictory). Dream logic then.

However, even given that argument I think the ending is a problem because it was so puzzling it threw me out of the story rather than bringing things to a satisfying conclusion, which could still be open-ended, or ambiguous - but I don't think a "wait, wha-?" was what Jeffrey Ford intended.

I think the Gelreesh was ultimately a kind of were-owl, although it could present itself as anything. At least, the jumble of human remains leftover from its meals reminded me of owl pellets.