THE DEEP ONES: "The White Hands" by Mark Samuels

THE DEEP ONES: "The White Hands" by Mark Samuels

"The White Hands" by Mark Samuels

First published in The White Hands and Other Weird Tales (2003). 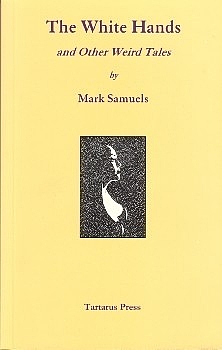 The Weird: A Compendium of Strange and Dark Stories
The Mammoth Book of Best New Horror 15

I'll be reading this from the Tartarus Press edition of The White Hands and Other Weird Tales.

I've recently learned that Zagava press has recently re-released this volume with long/restored versions of the title story, and at least one other tale.

Edited to add: rootling around on the internet, it seems (from YouTube, of all places) that The Weird has the longer version. That's where I'll be reading it, then.

Read this out of The Weird, so reportedly the complete / restored version. I noticed a few (deliberate, I assumed) passages that were repeated almost verbatim, and wondered whether those were the targets of the "cuts". I didn't try to run down that hunch, though.

While the story didn't pack as much of a punch as VanderMeer's introduction suggested to me, I wasn't surprised about that. My interest never flagged, and while I didn't have a visceral response, the ideas were interesting. I agree with VanderMeer that Samuels does better than writing a successful pastiche. The story works even without getting the references or in-jokes. (I'm not usually great at identifying those, but certainly more than one or two were evident even to me.)

The shift in narrative POV at the end was abrupt, but I was fine thinking of it as part of the homage to HPL and others.

ETA to fix the second paragraph, which read the opposite of what I intended to say.

I first read this story in the collection of the same name and it was the first contemporary weird story I had encountered after being introduced to the likes of Arthur Machen and M P Sheil, so it had a certain aura as coming from an author still working in that tradition. However around the same time a collection of Thomas Ligotti stories had found its way to my local bookshop so I could see there was a kind of double inheritance at work here. Rereading it over a decade later it does seem a little dulled by, I suppose, simply having more weird literature under my belt. The name Lilith Blake itself now seems a little overdetermined. I read the miscellany links and I gather Samuels no longer separates his Catholic beliefs from his writing ( which inter alias has caused a falling out with Thomas Ligotti Online).

I wondered if the mention of James Joyce was a hint that The White Hands should be regarded as a kind of Finnegan’s Wake of weird?

I've read several works by Samuels and enjoyed them, but I also didn't quite like this as much as some of his other works.

I thought the big surprises were Musswell's hands not being transplants of Blake's and Blake not being a straightforward vampire -- despite the lack of wildlife around her vault.

Still, I liked the atmosphere and the unanswered question. Is Harrington crazy? Is that why he read Blake's "The White Hands" which, he points out, only a lunatic would finish? Still, he claims to have some great alteration of his face which suggests something along the lines of Musswell's altered hands.

If Blake altered Harrington's face and Musswell's hands, it seems to imply Musswell visited Blake's body and touched it. To me, that suggests Musswell approached Blake as something like a lover -- he touched her hands, probably willingly. Mirroring Harrington's increasing predation (perhaps murdering Musswell), it is Blake that touches Harrington in a violent manner.

The story was certainly Decadent in Blake and Musswell reveling in the ecstasies of the grave -- which would normally, if you were conscious, seem the height of ennui.

I did like Samuels, a Machen admirer and scholar, having Musswell have such a low opinion of Machen.