THE DEEP ONES: "Erbach's Emporium of Automata" by D.P. Watt

THE DEEP ONES: "Erbach's Emporium of Automata" by D.P. Watt

First published in An Emporium of Automata (2013) 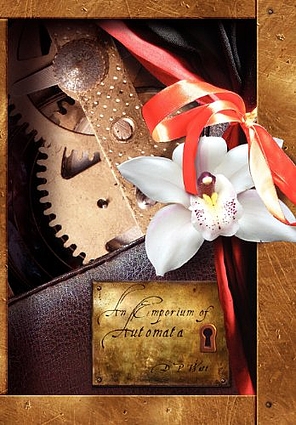 An Emporium of Automata

Maybe I've grown dense or something, but this was another one where I felt more confused at the end than I felt I should be. Just what unhinged Ivy? If the narrator acted as some sort of doubting Thomas that disrupted the magic of the automata Erbach was showing Ivy, why didn't he have the same effect on the similarly apparently magical automata shown earlier?

I liked the way the story was told, though.

(In case anyone wonders, "Erbach" is almost certainly the man's surname. He may be a member or scion of the noble house of Erbach, which goes back to the middle ages)

Underwhelmed by this one. I suppose we are to see Ivy, staring out onto the edge of the world, like that bicyclist automata who is confined to a table top. I assumed Watts wanted us to think that the mind bending revelation bestowed on Ivy is that we are, in a sense, clockwork automata in relation to a greater reality just as Erbach is a sort of god to his magical solar system.

For me, though, the story generated little awe or emotion.

I nominated this story, and now I feel guilty for getting the publication date wrong.

D. P. Watt lists his publications on his website (linked in >1 KentonSem:) and it turns out that this story was first published back in 2008. The first book publication was 2010 (from the enigmatic, Bucharest-based Ex Occidente Press). The image in >1 KentonSem: is the 2nd edition.

The interview, also linked in >1 KentonSem: gives some clues to Watt's aims with his stories - an appreciation of European authors and puppet theatre (in some other of his stories that I've read, the shared inspiration with the animators the Quay Brothers is quite obvious - to the extent that passages could be novelisations of their films, or Jan Svankmajer's), as well as the usual suspects of the British Weird - Arthur Machen, Robert Aickman, and some contemporary small press authors - which would lead one to expect a degree of ambiguity in the storytelling and perhaps in the Weird event itself (the original Theatrical version of Close Encounters of the Third Kind popped into my head as a comparison - remembering how the people the aliens reach out to somehow basically have their lives ruined by the experience (and the ending is not a straightforwardly happy one, by any means).

One author he didn't reference is Reggie Oliver which might be a surprise as the setting of this story is - as was "The Skins" (and a few more stories that we haven't done) - a post War British seaside resort. Although the narrator would be a couple of decades older than me I can remember resorts still pretty much like this in the 1970s. Although I can't remember an analogue to Erbach's Emporium of course I remember Punch and Judy shows on the beach, and coin-operated attractions such as a kind of vivarium full of marionettes that would jig about to music when the money was put in.

It could be that Erbach was a malevolent figure and using Ivy in some kind of magical working with the callous disregard of Dr Raymond in "The Great God Pan" or Mr Abney in "Lost Hearts" (in which case the Emporium would be nothing more than a lure), or he could have had a less malign purpose that was interrupted at a critical moment (although clearly he would have been placing a child in danger whatever his motives). Watt uses a small Uncanny effect - even a cliched one: the toy or doll that comes to life when it isn't observed. He says in the interview that he prefers such small scale effects to Cosmic scale cataclysms.

I think the story is, if not derivative, then drawing on two pre-existing strands of the Weird. There's the Machen-esque tale where contacting certain "Powers" can have life-changing effects (even if they may not be malevolent as such but simply too "other" (Close Encounters comes to mind again), and the clockwork and ceramic dolls and machinery imbued with life in the films of the Quay Brothers and Jan Svankmajer. The somewhat affectless, detached narrator is pretty much the default voice for British literary fiction (I got hold of Ian McEwan's Machines Like Me for something to read on holiday in France, and there's the narrator voice once again - reminding me of reading Christopher Priest and J. G. Ballard in the '80s).

The story has a resonance for me, as someone who found a certain magic in seaside towns in my own childhood. But it does feel a little bit stitched together from other sources (but, to do the author justice, we've found out this is quite an early work of his).

And to give due credit, there's almost a daring in the hackneyed nature of the story elements: an enigmatic magician or wonder-working stranger, somebody who "sees something" and is never the same afterwards, a doll that comes alive.

I loved the setting of this, enough that the minimalist storyline was fine. I've been thinking about re-watching the film version of Something Wicked This Way Comes, given the Hallowe'en season, and the story reminded me of that idea.

I also thought of both Reggie Oliver and the Brothers Quay / Jan Svankmajer, and perhaps I should pull out those DVDs for seasonal viewing! Not only Oliver's "The Skins", but his general use of a post-war British setting, especially in the regional theatre.

The story was evocative for me, then, rather than provocative. But I've always liked fiction that sets a mood and often don't need more than that, so perhaps I'm a ready audience for this story.