THE DEEP ONES: "Some Words with a Mummy" by Edgar Allan Poe

THE DEEP ONES: "Some Words with a Mummy" by Edgar Allan Poe

"Some Words with a Mummy" by Edgar Allan Poe

First published in the April 1845 issue of the American Review. 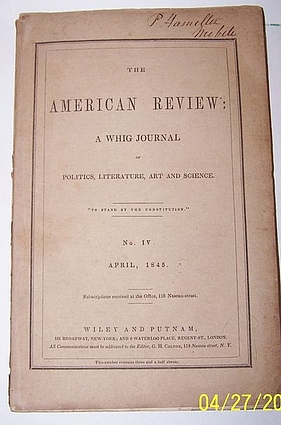 I have this in a few editions but decided to crack open The Macabre Tales of Edgar Allan Poe.

>2 housefulofpaper:
That looks like a beautiful edition. I missed its publication and it is now sold out. Enjoy the luxury of reading from a beautiful tome.

I'm sure that the gruesome details of the Egyptian mummification process were quite mesmerizing to Poe's 1845 readers, but what I found really interesting was the application of electrical current to revive the mummy. I wonder if the makers of Hollywood's 1931 FRANKENSTEIN actually got the idea from this story, as it sure wasn't from Mary Shelley's novel.

I enjoyed the droll humor (especially the poke at politics) and nice touches like the group fixing up Allamistakeo after they had damaged him in the course of their autopsy. The Q&A between the men and the mummy was fun, rather like something Mark Twain would produce a little later on.

As far as "who will be President in 2045", I think I could use a couple - or 6 - brown stouts before considering that one any further.

I see from the LibraryThing born and died lists that today is the anniversary of Edgar Allan Poe’s death.

I've always liked Poe better in gothic than in humoristic/parodic mode, and I'm afraid I didn't like this one much at all.

The idea of revivification by electricity was, I believe, a commonplace in the early 19th century. Galvani's 1780 discovery that electricity could make the muscles of a recently deceased frog contract inevitably suggested the possibility that properly applied it could effect a more general resumption of vital functions.

I can just imagine screenwriter John Balderston sitting around working on his play/screenplay for FRANKENSTEIN, thinking, "hmmm how can I give the monster's creation a little more *oomph* than it has in the novel?" He then remembers Poe's mummy story and voila! For that matter, Balderston's screen version of THE MUMMY (1932) also carries a whiff of Poe's urbane Egyptian conversationalist, especially once a slightly wrinkled Karloff takes up residence in his Cairo, errr, digs.

My discovery of small presses like Tartarus more or less coincided with the 2008 Banking crisis - I convinced myself that buying their books was doing my bit for the economy!

So, like the "Le Pied de momie", this story uses an Egyptian mummy for satirical purposes. Having read all the Poe stories in the Everyman edition (good grief, getting on for 15 years ago now) I feel the satires and the shaggy dog stories, the laboured jokes and the show-offy erudition are all necessary to get a picture of the man "in the round", and to situate him in his time and place.

It's interesting to see that Poe follows Gaultier in making the Ancient Egyptians very long-lived. A fusion of the durability of their embalmed remains with the lifespan of the Old Testament Patriarchs, I suppose.

I wondered when archeological excavations took care to record all traces of everyday life instead of concentrating on digging up treasures? I got the impression from numerous BBC documentaries that it's a relatively recent concern. So was Poe's "The grottoes at this point, although less magnificent than the Theban sepulchres, are of higher interest, on account of affording more numerous illustrations of the private life of the Egyptians " a reflection of what was already best practice, or was it one of those instances where his intellect seems to flash out across two centuries and, in that particular topic or train of thought, he seems contemporary with us (or even ahead of us)?

I've replaced the Everyman with the Library of America edition of the Poetry and Tales and it's noted there that Poe has included real people in his story and his contemporary readers would have picked this up: George R Gliddon was an actual Egyptologist, James Silk Buckingham had written several travel books about the Near East, Jennings was "a well known New York haberdasher". It's hard to imagine that they would have enjoyed their portrayals here. Brandreth's pills (also real) had nothing to complain about, though!

I'll just mention here that the mummy of King Rubbatiti is revived by electricity in Carry on Screaming :)

Yeah, perhaps I should just shake my fist at Poe and snarl, "Get off my lawn!" -- but I found myself offended more than amused at his descriptions of the mummy's treatment. I know it was meant as satire, but I didn't find myself laughing. Maybe it worked just as he intended.

I also was struck by the mention of "everyday life", not just in the archaeology but in the hieroglyphs on the coffins.

I read in the Peithman annotated edition.

>I somehow missed Gliddon was a real Egyptian. Buckingham evidently earned Poe's ire because of his writings critical of the South and slavery.

Some of the jokes still worked for me. I liked the mocking of the narrator himself with his ignorance, gluttony, and shrewish wife.

It's not really a weird story, but I'd consider it proto-American science fiction from a couple of perspectives.

First, there's the advanced science of the Ancient Egyptians.

Second, Peithman notes, I suspect by way of James Gunn's Alternate Worlds (though I haven't checked my copy), that this story uses the idea of sleeping your way into the future that was taken up by Edward Bellamy's Looking Backward and H. G. Wells When the Sleeper Awakes. It's not an entirely original idea. Washington Irving certainly used it in Rip van Winkle, and there's the related notion in faerie lore of time passing at a different rate in the two worlds. However, Poe uses the notion to deliberately and repeatedly travel through the future.

There is a minor sub-genre of stories with future archaeologists arriving at erroneous conclusions about our world. (The French roman scientifique had lots of stories about future versions of Paris and archaeologists studying 19th century Paris.) Poe, however, reverses that with the past coming to us directly to disabuse of us our bad scholarship.

>10 RandyStafford: There is a minor sub-genre of stories with future archaeologists arriving at erroneous conclusions about our world.

CAS's "The Great God Awto" would be an example, which I'm now tempted to nominate for next season.

>11 AndreasJ: Yes, I was thinking of that story among others.