THE DEEP ONES: "The Signal-Man" by Charles Dickens

THE DEEP ONES: "The Signal-Man" by Charles Dickens

"The Signal-Man" by Charles Dickens

First published in All the Year Round, Christmas (1866). 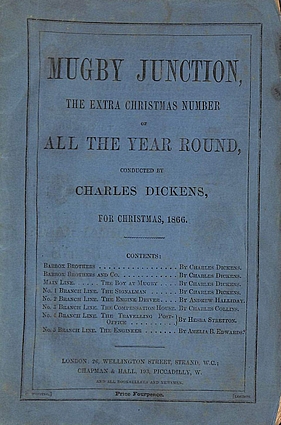 I'll take this opportunity to reread this as part of Mugby Junction, in a paperback reprint of all the stories in that Christmas number of All The Year Round.

This is the story I remember best from seeing on Christmas Eve ghost story broadcasts in the 1970s.

On of those stories that seem competent but somehow don't do anything for me. I found myself reflecting on the class aspects as much as anything else.

Read this one years ago and didn't like it much.

On a second reading, I liked it more. I rather liked the idea of a ghost (there's a specific term for apparitions that aren't strictly speaking ghosts of the dead but warn of disaster, but I don't remember it) that gives warnings that are not at all useful to the conscientious signal-man.

I liked that the narrator was rather like Dickens' Scrooge at the end of A Christmas Carol -- a man who was decided to go out into the world to observe it.

This isn't like "The History of the Young Man With Spectacles", you don't need the Mugby Junction frame story to get a deeper appreciation of "The Signal-Man".

There are some interesting snippets of autobiography under the surface of the story (and the decision to theme the Christmas edition of his magazine around a railway station). 18 months before he began work on Mugby Junction Dickens was on a train that derailed crossing a viaduct (workmen, consulting the wrong timetable, had prised up the rails). All back the last of the first-class carriages were thrown into the River Beult. Dickens (secretly traveling with his mistress Ellen Ternan and her mother) were in that last coach, hanging off the viaduct but coupled to the second-class carriages still on the tracks. Dickens spent three hours trying to help and comfort the injured (he had a flask of brandy, and collected river water in his top hat). 10 passengers died and 40 were wounded. The introduction to my book reports one man dying as Dickens tried to comfort him.

Dickens' nerves were permanent affected. He became very nervous travelling by train, often having to get out before his destination and walk the rest of the way. It's a similar impulse that prompts the protagonist to alight at Mugby in the frame story, and Dickens sees no oddness in having him stride up and down along the various branch lines, either in following his own story or collecting the other tales that round out the collection.

The main/frame story of Mugby Junctionn is determinedly cheerful about the new technology of the rail network, focusing on it's bringing people together, like a visible symbol as well as actual enabler, of society.

The Signal-Man is the flip-side to this optimism. The modern technology (is it telegraph wires sending simple yes/no menages via a ringing bell? I'm more than a little vague on 1860's railways generally) is already haunted. It has something of the seance about it (this point has been made before, about so much of the per-digital technology that I'm sure most of us grew up with and took for granted: telegraph, telephone, radio - disembodied communication (even voices) from who knows where); gramophone records - the same, but preserved, even the voices of the dead (is it strange that that doesn't seem strange to us, any more?); television - cathode ray tubes were first used to try to detect ghosts, or to prove the existence of immaterial "stuff" that they might be composed of).

I nominated this story because I thought I remembered it as being closer to a Weird tale than a traditional ghost story, there being no back story of unrighted wrongs and so forth, but just this eruption of The Uncanny, apparently not malevolent but, if well-intentioned, ineffectual in it's attempts to communicate, and deeply unsettling, disrupting this new, modern, time-tabled and technological world.

But from the off, the new technologies have been subject to accident or inherent risk or unlucky chance. The derailment that could have killed Dickens, had he been in a different carriage, was not the first such accident by any means. And also, there's the inherent spookiness of the new technologies, belying their apparent banishment of any thought of the old superstitions and fears.

There is ONE new horror, and it's the psychological pressure on the Signal-Man to stay alert, to discharge his ostensibly easy duties but to NEVER MAKE A MISTAKE for fear of causing the deaths of trainloads of passengers (Andrew Davies' screenplay for the TV version expands on Dickens' description of the first accident to describe the effects of a fire in a railway tunnel and the film attempts, on its very low budget, to hint at them in a flashback).

>6 housefulofpaper: Very informative context. Thanks for putting that together.

The link between electromagnetic communication and the dead continues up to the 1920s with Edison being interested in a phone to connect to the spirit world.

"The Signal-Man" was assigned to my high school English class waaay back when. I remember really liking it. It's still an enjoyable ghost story.

The train wreck, Dickens, and Wilkie Collins are all integral parts of the Dan Simmons novel, Drood.

>6 housefulofpaper: this eruption of The Uncanny, apparently not malevolent but, if well-intentioned, ineffectual in it's attempts to communicate

I see that interpretation, and find it plausible.

Another interpretation I considered is that the apparition intends the death of the Signal-man, and brings it about quite effectually. The irony of the ending, in which the warnings (causing the Signal-man so much distress before the accident) directly precede the mistake of the conscientious worker, reinforce this view. Whether they contribute to the mistake, or not, I suppose is an open question, but it seems plausible.

I like especially that upon finishing, I don't have a strong conviction that one or the other interpretation is "correct", that both of them serve equally well.

I'm fairly certain I've read this before, and typical of me I had no recollection of it even while reading. I vaguely thought something might happen to the narrator rather than to the Signal-man, as I got nearer the end.

I really like the idea that the narrator is somehow haunted without being aware of it: that he has "heard" in his mind the words the engineer ended up saying, and that earlier he spoke the words which so frightened the Signal-man, without having any idea they were any words but his own. That's a special kind of horror, thinking oneself to be the agent of malevolence despite one's own preference! It is, I suppose, a variation of that trope in which a character turns out to be dead the entire time.