THE DEEP ONES: "The King That Was Not" by Lord Dunsany

THE DEEP ONES: "The King That Was Not" by Lord Dunsany

"The King That Was Not" by Lord Dunsany 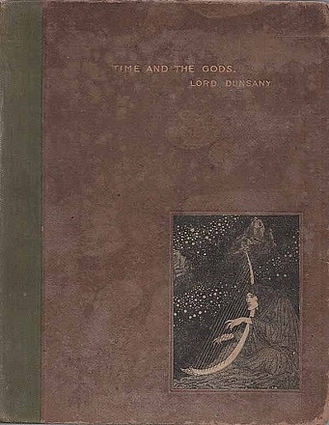 At the Edge of the World
The Complete Pegāna: All the Tales Pertaining to the Fabulous Realm of Pegāna

I think online for this one.

A slight tale, at least in wordcount, but I did not feel slighted having read it.

Reading from the Sacred-Texts link, I wonder at the layout in the original or other print editions. The opening lines are typical Dunsany, but then the next paragraph had me briefly wondering whether I'd missed something, or whether some text were actually missing. Re-reading, I saw it was exactly as I'd understood, so I put it down to Dunsanian humour and pressed on. It all came out in the end, but I do wonder whether the opening lines originally were styled as an epigraph.

I also presume this story benefits when read along with the others in Time and the Gods, and reminds me I still need to obtain a good copy.

In the scanned version of Time and the Gods at Archive.org, the first paragraph is not typeset any different from the following ones.

As I noted when nominating this, it's invoked in The Case of Charles Dexter Ward, where the damnatio memoriae of Curwen is compared to Althazar's fate.

The gods of Pegāna are said to have faces, hands, etc., so I'd imagined them as anthropomorphous, like those of Olympus. It was a bit of a start therefore to read here that they objected not merely to being depicted with faces much like Althazar's, but like those of men at all.

Something I appreciate about Dunsany is his ability to pack a lot of punch into very brief stories.

I enjoyed this one and Dunsany's wry take on a divine curse. I also liked how the priests justified their position on sincere, but incorrect, grounds.

The strange discontinuity between the introductory paragraph and the story body is also present in The Complete Pegana, where they are all in the same type, but the opening is set off by a centered triple-asterisk break.

>4 AndreasJ: Something I appreciate about Dunsany is his ability to pack a lot of punch into very brief stories.

Agreed! There's so much to muse about yet I seldom feel he left out something crucial.

>6 paradoxosalpha: the opening is set off by a centered triple-asterisk break

Presumably Joshi had some extratextual grounds for that editorial decision, and not merely personal preference.

I especially enjoyed the vanity of the gods, posturing for their portraits.

Re-reading that opening paragraph, I see now its final sentence takes on a wry meaning it didn't have on my first reading:

Therefore in Runazar the priests hold sway, who tell people that never in Runazar hath there been a King.

Very much aligned with the gods' vanity and priests' sincere but mistaken rationale. I read in it now almost an intentional inversion of the QED, as if it suggesting it would better read:

{The Priests are they} who tell people that never in Runazar hath there been a King, therefore in Runazar the priests hold sway.

Is the first paragraph set apart from the rest of the text, I wonder, because it must be a different narrator? The gods have made it that King Althazar never existed, and the institution of kingship never existed in Runazar, and the opening of the story states this truism. (A hard-SF mentality would ask how the robe and crown remained, I imagine, and go on to wonder whether the history of the place should have been changed rather than one man erased from it, but I suppose the simple answer is that it's not that kind of story).

The rest of the story is told from a viewpoint or level of knowledge that must be above the human - a literal "god's (or gods') eye view.