THE DEEP ONES: "Unseen - Unfeared" by Francis Stevens

THE DEEP ONES: "Unseen - Unfeared" by Francis Stevens

First published in the February 10, 1919 issue of People's Favorite Magazine,. 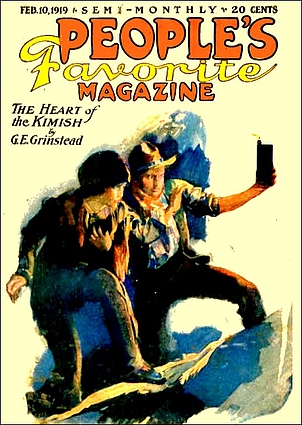 The Weird: A Compendium of Strange and Dark Stories
Unforgettable Ghost Stories by Women Writers
American Fantastic Tales: Terror and the Uncanny from Poe to the Pulps
Women's Weird: Strange Stories by Women

Huh! I'd never heard before of my "Favorite Magazine". Unless that's an exclusive use of "People".

Presumably will pull out my copy of The Weird. Disappointed the LOA link didn't include some background on either the story or Stevens, their editors are usually good about sharing relevant anecdote and biography.

What's happened to "The Horror of the Heights"?

>3 housefulofpaper:
I thought it was a bit soon for Nov 4. Will have "The Horror of the Heights" up shortly!

In her introduction to Women's Weird: Strange Stories by Women, Melissa Edmundson notes that this story "presents racist thoughts as a sickness, the thoughts of one who is deranged in mind, not a part of normal human feeling", and that "The treatment of racist views in Stevens's story provide an important counterpoint to the more blatant racism in the fiction of Lovecraft". I suppose that's so. At least, the narrator here makes a rather un-Lovecraftian moral decision at the end in refusing "to ever again believe in the depravity of the human race". I find that to be a bit too Pollyanna, though.

The major weird scene featuring the glimpse of the starfish thing and the other ghastly creatures anticipates HPL's "From Beyond", which was written only one year later. Hmmmm....

Well, as Hanley says in his review of the story at Tellers of Weird Tales, it's a detective story, a ghost story, and a science fiction piece.

I liked it. The idea is similar, of course, to Lovecraft's "From Beyond", but the ending is much more humane with its reaffirmation of human worth. The Italian man that seems so bestial turns out to care enough about the narrator to ask the police to find him. If I recall correctly, the entities Tillinghast reveals in the Lovecraft story attack people. Stevens' creatures seem like tulpas whose mere sight renders the viewer dangerously despondent.

I did question why the narrator has so much fear and loathing before he got to Holt's lab. Was some sort of psychic radiation flooding the area upon the suicide of Holt?

Do we know if Lovecraft read this before penning "From Beyond"? The introduction in The Weird quotes him as having high praise for Stevens' 1920 novel Claimed.

(For a man much given to self-criticism, HPL could sure be effusive in praise of others' work.)

The ending is un-Lovecraftian only in part, I think. The idea that some things mankind is better off not knowing, and the protagonist's readiness to be the arbiter of which those are, would be perfectly at home in a HPL story.

Actually, that's a thought that's been percolating in the back of my mind for a while now: there are many stories, not all horror, where the protagonists decide that the world is not ready, or never will be ready, for some revelation, but there seems to be few where they are at all troubled by the question what gives them the right to decide. The ending here comes about as close as I recall seeing, and their concern is more with legality than morality.

Momentary lapse into debunker mode: if the critters are material enough to climb Holt, how come we don't feel them, however invisible they might be? They appear to be less invisible than illusory.

>7 AndreasJ: The Tellers of Weird Tales series on Francis Stevens seems to doubt Lovecraft read the story before he wrote "From Beyond"

Yes, Lovecraft protagonist's in particular are always try to conceal something. Even the U.S. government gets in on the act in "The Shadow Over Innsmouth".

The blog Skull in the Stars suggests that Stevens lays on one side of a divide between a moralistic universe and a nihilistic universe in weird fiction, Lovecraft being on the latter side. I think that's defensible interpretation for this story. The narrator talks of a moral order that must be maintained by suppressing the sight of the manifest thoughts and emotions of others. Lovecraft's protagonist in "From Beyond" (so my memory says -- we're reading it in a few weeks) wants to spare the world from predatory entities and insanity. So, new vision bad for morals and society for Stevens, bad for basic sanity for Lovecraft. And, of course, you see that in how the narrator wants to think well of those he feared and loathed the night before. The closest thing to that kind of change in a protagonist's attitude in Lovecraft is "The Shadow Over Innsmouth". That's because blood has its draws among kinfolk. Stevens sympathetic vision is extended to those outside of the economic, ethnic, and racial identity of the protagonist.

Which leads me to speculate if weird fiction by female authors is more attuned to human connections and that of male authors given to more loner types divorced from society.

I think the implication is that the combination of an imaginative nature and an accidental poisoning has left Blaisdell open to psychic attack by the spirit of Doc Holt. I can't point to specific examples, but it feels like this is in accord with the understanding of psychical researchers of the time, which naturally leaks into the water culture (I think you can see a parallel in the confident assumption that telepathic ability is a "thing" in novels, films, and TV shows of the 1970s).

I'm glad we read this one at Halloween. It meant I'd read and seen some "real-life" ghost stories on social media before coming to this one. It pointed up how the ordeal of seeing the things and the faces is a haunting of a kind, and Blaisdell's terror (which I think I felt somewhat formulaic and overdone when I first red this story, probably 10 years ago) actually ties up with eyewitness accounts of real hauntings.

I haven't read the blog linked in >1 KentonSem: yet, but I did note that, yes this is in part a science fiction tale, but it's specifically a Mad Scientist story.

>7 AndreasJ:
In part, of course, "destroying the evidence" is a useful device to explain away the fact that the world we live in hasn't been fundamentally changed by the terrible revelation in the story (whatever they might be) whilst still maintaining the pretence of the tale's veracity.

In recent decades it's changed from "the right thing to do", to "the Government/Big Business/etc." are covering this up and it's bad" - cue conspiracy theories...

>8 RandyStafford:
Which leads me to speculate if weird fiction by female authors is more attuned to human connections and that of male authors given to more loner types divorced from society.?

If you look at Science Fiction rather than Weird Fiction for a moment, as a genre with better-defined borders and history, it does look that way, certainly in the "classic" years of the pulps. But were they to some extent writing to a pre-existing market of (chiefly) young men who already had a taste for a particular type of story? I was going to offer the kind of socialist Utopian tale being written (by men) in the late Victorian period as a counter-example. But if their focus was political systems and world-building, rather than actual human connections and relations, then that would play into a sex-based distinction too - this time, between the "intellectual" male and the "emotional" female writer (I would say that there's an unspoken assumption that the intellectual, male, writer is superior; but in practice aren't those Utopian novels generally left unread now, with a reputation for being musty and dry as dust?).

I would have thought that Weird fiction would tend towards the "Male" kind of writing because, firstly there's the horror element and generally that works on the basic drives and fears. The reptile brain isn't very "nice", it's certainly not PC. And then, the mystical element that is often present (and is maybe the thing that sets it apart from straight horror) is usual a lone quest or experience undergone alone. A third factor, certainly very prominent in a lot of mid-20th century work, is Freudian psychology. I'm not particularly knowledgeable about it but obviously it starts with a man telling his patients how their minds work (including many female patients, naturally) and the psychiatrist in popular culture at the time the works I'm thinking of was written, was always a man.

Another HPL with a perspective shift from antipathy to sympathy is "In the Walls of Eryx", there without any revelations of blood ties or the like. But that story was a collaboration and that element is perhaps due to the (male) coauthor.

I'd not read this before, and generally liked that I wasn't able to predict where it was going. Borrowing tropes from detective fiction sat rather well, I thought. The prose was an interesting blend of streetwise, almost hardboiled diction, and uppercrust expressions. I'm not sure I dislike it so much as it's distinctive, but I wasn't immediately drawn to it.

I wondered about the inability to feel a starfish crawling up my body, or for that matter not bumping into any creature in a room which, by all accounts, is full of them. Stevens didn't clarify well enough that the detection is not merely visual, that these creatures are of another dimension as opposed to merely invisible.