THE DEEP ONES: "The Horror of the Heights" by Arthur Conan Doyle

THE DEEP ONES: "The Horror of the Heights" by Arthur Conan Doyle

"The Horror of the Heights" by Arthur Conan Doyle

First published in the November 1913 issue of The Strand Magazine. 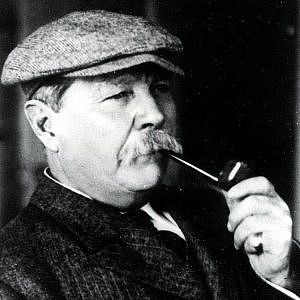 I've been revisiting the Jeremy Brett BBC series of Sherlock Holmes adaptations, so it's good to meet with Conan Doyle this way, too.

Online for me unless I find it unexpectedly in some collection.

I have The Original & Illustrated Sherlock Holmes by Arthur Conan Doyle but this story is not in my book so appreciate the information.

This is the third time I've read this story, and I still like it. It's a forerunner to some of the things Charles Fort would later present to the world. I think it's in New Lands that he proposes all sorts of odd things in the sky.

The thing that struck me this time was the sentence "Talk of human degeneration!" It has been argued that a general European fear of humanity, or, at least, European civilization, was losing its vitality was a factor in the enthusiasm people felt when WWI broke out.

One of Stableford's footnotes in Scientific Romance says that a flight up to 30,000 feet was not done via airplane until June 1919. (There was a balloon ascent to that height in 1862, but the passengers lost consciousness due to lack of oxygen.)

Stableford also notes that Doyle's interest in the scientific romance peaked in 1912 and 1913. He compares this to one of William Hope Hodgson's weird sea tales -- finding strange menaces in the uninhabited zones of the planet.

First time reading this story, and I read it online.

It's a near future story, isn't it? 20 years after the discovery of powered heavier-than-air flight would place it in the early 1920s. I found myself darting off to check the things being said about flying at those altitudes. Some of it was apparently incorrect, the assertion that a compass wouldn't work being one (if I can trust the first online article I lighted upon; I didn't do extensive research!).

When I read Conan Doyle's non-Holmes stories I often find myself missing the character of Holmses and the narrative voice of Dr Watson (actually I miss them in the long, long flashback/explication sections of A Study in Scarlet and The Valley of Fear too) but I didn't feel that here.

The comparison with William Hope Hodgson is illuminating, but if the skies over Wiltshire can be considered an "unexplored corner" of the world, then there's also a comparison to be made with Doyle's own The Lost World. I'd suggest Poe as the major inspiration for this story (the scientific romancer/literary hoaxer Poe, with his impossible balloon fights and descents into the maelstrom and so forth). I did spot the nod to Jules Verne as well, with the "Robur" (I didn't imagine it I hope. I can't find it in the text now).

Also read online: the ACD site linked above is well done, reproducing illustrations from various appearances of the story.

I also thought of Poe, and while not as familiar with Verne also see the parallel to "unknown worlds". The upper atmosphere as unobserved or unexplored and so open to speculation at what may be there.

I do wonder a bit at his air-jungle concept: why does Joyce-Armstrong fix several jungles above specific locations? Even in the Age of Sail it was clear to observers that cloud cover accumulated above land, but just as clearly that these moved on and there were days of nothing above. Perhaps he understands the "clear blue skies" to be illusory, that these creatures floating above the clouds were just too high to be seen but are there all along.

Finally got around to re-reading this today. It's ages since I read anything by Verne, but I see what you mean by Poe.

Regarding the apparent stationarity of the jungles, I suspect the idea is they're simply too high up to be affected by winds. Speaking of height, Conan Doyle's unduly optimistic about human adaptability to rarefied air - the shortage of oxygen at 40,000 feet would kill you pretty quickly even with mountaineering style acclimatization over days and weeks. The "slow" ascent of an airplane would make no difference at all.

Scientific implausibility aside, though, I think it's a pretty good story.

>6 elenchus:
>7 AndreasJ:
I have to confess that I haven't read a great deal of Verne; I know Robur from mentions in The League of Extraordinary Gentlemen and Vincent Price's portrayal in Master of the World!

>5 housefulofpaper: You're not wrong to think of Poe. Doyle was a great admirer of Poe.