THE DEEP ONES: "In the Penal Colony" by Franz Kafka

THE DEEP ONES: "In the Penal Colony" by Franz Kafka

"In the Penal Colony" by Franz Kafka 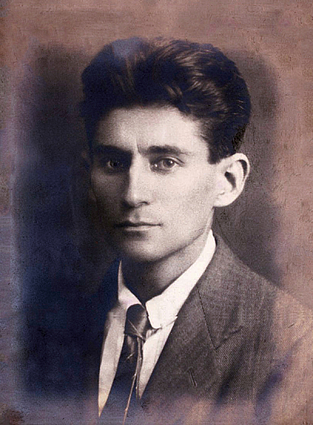 I'll be reading it from The Weird.

The translation in The Weird would be new to me, but I may attempt to read in the original German.

Oh, when you mention it, why shouldn't I go for the original? It's online at Wikisource.

I've got The Weird, but I'll read this in the Folio Society edition of Metamorphosis and other stories. This translation is by Michael Hofmann (it's also the current Penguin translation, according to the copyright page).

Think I'll read my Limited Editions Club version of this

I've enjoyed Kafka's brand of Weird before knowing much of the Tradition: in fact, I have to acknowledge his short stories as a key part of my introduction to Weird fiction. As a rule, done without supernatural creatures and a focused interest on urban modernity, the atmosphere and tone do the heavy lifting.

An aspect of "In the Penal Colony" I especially like is that it doesn't go where I think it's going. Maybe it's unintentional on Kafka's part, but the setup and first two-thirds of the story give me the strong impression that the Traveller (in one place translated as Explorer in The Weird) is going to end up in the apparatus. The fact that the Officer voluntarily submits, rather than turning on the Traveller, takes the story in a wholly unexpected direction. And then, Kafka doesn't end the story there: no, the Traveller first tours the nearby village, visits the grave of the first Commandant, and then ... sails away.

And the Soldier and Condemned seem to have an oddly amicable relationship, even before the Officer releases the Condemned from his sentence.

Like with so many Kafka stories, I'm tempted to take an allegorical reading. The premise, at least, suggests that we're all Condemned, facing a natural (and man-made) world to which we must simply submit. There are no explanations given, nor are any deserved. Any transgression against the many inexplicable laws are met with immediate consequences, without regard to social justice and without any opportunity to defend oneself, certainly not to give an excuse or request mercy.

Typically for me, though, as helpful as the allegorical reading can be, it never fits all aspects of the story, and so the story never loses it's overall sense of the uncanny. In this case, the above reading doesn't explain who the Officer might be, if the Old Commandant is thought of as Mother Nature (or God); perhaps a scientist? Then why submit oneself to the apparatus, and why would the apparatus break down?

For me, allegory often drains a story of its characteristic Weirdness, leaving me liking the story at the beginning more than I like it at the end. With Kafka, that rarely happens. I've read this story at least a half-dozen times, in translation and in German, and it never loses its hold on the Weird.

Incidentally, I enjoyed Ian Johnston's translation in The Weird, lending a contemporary feel. I didn't like the capitalization of character titles in lieu of names, though, thinking it unnecessary. This follows the German, but of course all nouns are capitalized in German, and don't hint at allegory the way capitals do in English. The first two links to online versions use the same Johnson translation; the third one does not, and fits better with the overall tone of the story.

Interesting pictures available at the third ONLINE link, by the way.

I have a residual wariness of Kafka that means I still haven't read a great deal of his work. The dystopian fiction and political allegory I read in the 80s (when 99% of my non-comic book reading was science fiction from the Anglophone pulp-and-paperback tradition) tended to be pretty tough going, (whether writing from the Right or the Left). Not so much difficult to follow as just turgid.

The picture I got of Kafka, or of what Kafkaesque meant, was also confusing: on the one hand a modern but needless behemoth of bureaucracy (Orson Welles' version of The Trial, or Terry Gilliam's Brazil), and then on the other, a stifling bourgeois family life, specifically Middle European and Jewish (and hence distanced from my personal experience). And on top of that the posthumous aura of his having in a sense predicted the Nazis rise to power and the Holocaust.

Whatever it may say about my possible intellectual and moral shortcomings, all of this, in sum, meant that I haven't sought out any Kafka to read for pleasure. I did buy the Folio Society editions and so far read one of them, which includes "In the Penal Colony". Which I also read in The Weird, and reread for this. I think I have read a comic book adaptation as well, but I can't recall where, or who adapted it.

So I am not really familiar with Kafka's work, although a distorted-mirror impression of him is unavoidable I think, for anyone growing up post WWII and being at all aware of literary or artistic culture. That said, this is the single work of his I'm most familiar with.

And it is a more entertaining read than the impression of "Kafkaesque" I'd picked up would have led me to expect. It's not a cast-iron rule that great writers are also writers who produce "a good read" or "a page turner", but it's often the case - something I noticed with pleasure and surprise (and relief) when I stopped reading genre fiction in my twenties and dived into a homemade course of Great Literature (it was supposed to be broadly historical, and I did start with Homer (in translation) but soon went off into the byways of literature - Thomas Love Peacock before Dickens for example).

I'd agree with Elenchus that the twist wrong-foots the reader. He reminds me that on my first reading I was also expecting the traveller (or explorer or researcher in other translations) to end up in the apparatus. As the traveller's a stranger to the penal colony, does Kafka want us to identify with him, through sharing a sense of social anxiety with him - not knowing how to behave, firstly at this elaborate and cruel execution, then in response to the officer's increasingly strange behaviour? (or is it supposed to be funny - very dark humour, if so).

The notion that the protracted torture would result in some kind of epiphany on the part of the victim that the spectators could observe - is that the basis of the French film Marytyrs? a film that to date I've been too timid to sit and watch.

The reader has been seeing things from the viewpoint of the traveller right up to the end of the story, when he drives the soldier and the condemned man from his boat. It's a bit of a slap in the face to the reader and maybe makes them reassess where they stand, if this is an allegory. You, dear reader, are not the aloof, privileged visitor from another land (not necessarily France, just because he and the officer converse in French); no, you are on a par with the soldier and the condemned man, subject to the whim of forces you can't control.

I haven't said anything about the officer's behaviour. Is it believable? I think so. There are plenty of people who will follow a charismatic leader. There are plenty of people who are willing to serve provided that they are not a the bottom of the pecking order - that they have people they can feel superior to and dominate. And if that's taken from them they can'y cope. You could offer them a truly functioning socialist paradise and they would be psychologically destroyed by it.

Strange how ill-regarded the old commandant trust was, as we discover at the end of the story. What to read into that? That the new commandant rather than being in any way more liberal than the old, simply doesn't care one way or the other whether the executions continue, as long as it doesn't use up his budget?

Trying to understand the motives of those in power, and being unable to influence them, feels very contemporary.

Agree there is much believable about the officer's behaviour and thinking. His willingness to self-sacrifice goes along with that.

Strange how ill-regarded the old commandant trust was ...
Not quite sure what you mean by "trust", but also agree that the general ill-regard of the old commandant was significant. Attempting to extend my allegorical reading, with commandant as either Natural Law or an omniscient if distant Creator, it suggests either a social separation from old religion or even nature as given. With Kafka's prevalent concerns with modernity, it's tempting to think of the increasing artificiality to humanity's living environment.

But as I've said before, I don't find this reading completely persuasive nor consistent with everything in the story.

Not quite sure what you mean by "trust"
I don't know what it means either! I think it's an artefact of Safari's aggressive autocompletion and my poor proofreading skills. Apologies.

I also have not read a lot of Kafka and know him mostly by reputation.

Since that reputation includes stories on bureaucracies and given my own "career" in bureaucracies, here's my interpretation of the main story.

The New Commandant, like many a bureaucrat taking a new position with authority, is determined to make changes. He doesn't have any problem with executions. He does have a problem with the machine because it's the policy of the Old Commandant made manifest.

The Officer is loyal to the old policy and the Old Commandant. He's totally invested in it even if he's not getting any money for or help in its upkeep, no support from the new boss, no public acclaim. The Officer is still on the org chart and the machine in the policy manual though.

However, I don't know what the end of the story is all about.

I do suspect that the machine itself owes something to Kafka's days examining issues of worker safety.

>13 RandyStafford: However, I don't know what the end of the story is all about.

Not sure this is meant as a compliment from you, but for me it definitely is. I also take a bureaucratic reading of the story, Kafka is good for that. I love that there's more there, and such turns as that ending make it difficult to insist that Kafka is only about the bureaucratic aspects of his scenarios.

I don't think Kafka needed "editing" so his story could be more efficiently bureaucratic, I guess I'm saying. He was up to something else, besides.