THE DEEP ONES: "From Beyond" by H.P. Lovecraft

THE DEEP ONES: "From Beyond" by H.P. Lovecraft

"From Beyond" by H.P. Lovecraft 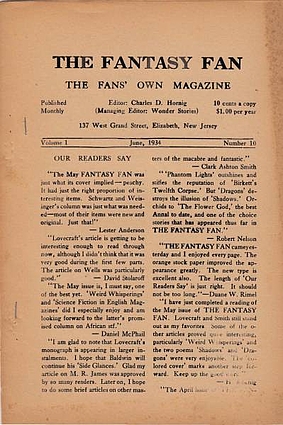 Another opportunity to dip into my copy of Dagon and Other Macabre Tales!

Read this one online after noting to my surprise I don't have an epub version on my e-reader. Thought I had all of Lovecraft's "serious" fiction there.

(Lovecrafts unserious fiction would include things like "Sweet Ermengarde" and "Ibid". The latter is worth reading nevertheless.)

Hadn't read this one in ages, possibly not since first discovering Lovecraft about fifteen years ago. Something I'd forgotten was the "landscapes" the narrator sees under the machine's influence. I'd also conflated the flopping things with the horrors that's supposed to eat him.

For someone bent on murder, Tillinghast was remarkably unconcerned with the narrator's revolver.

It seems crazy to me that we haven't read this one before. It's such a seminal piece. Tillinghast is a fairly classic mad scientist, but HPL conflates the trope with the Faustian sorcerer and emphasizes things-man-was-not-meant-to-know.

The exotic visual perception business is actually handled better here than in "The Colour Out of Space," I think. (ETA: Not to deny that "Colour" is in most respects a far more accomplished piece of work.)

In Lord of a Visible World, editors Joshi and Schultz suggest that "From Beyond" was partly inspired by a dream recounted in a 1919 letter from HPL to the correspondence group the Gallomo (pp. 76-7). It is set in 1864 with a US Civil War context, and it features a mad scientist named Dr. Chester, who is even more of a Frankenstein type than Tillinghast is.

That provenance is interesting given the strong parallels to the story recently read by DEEP ONES, Stevens's "Unseen - Unfeared". According to the dates we have listed, the Stevens piece appeared a year before HPL wrote this. HPL actually improved on Stevens, in my view, by making the piece shorter and quickening the pace.

I have not yet consulted HPL's "Supernatural Fiction" essay, assuming he mentions "Unseen - Unfeared".

The prose of "From Beyond" is quite good, and even the characterisations. I think HPL did himself a disservice with his opening line, however; the impact of the rest of the following paragraphs would be so much more forceful if they weren't trying to live up to "horrible beyond conception".

I dug out my copy of the Penguin Modern Classics The Dreams in the Witch House and Other Weird Stories for S. T. Joshi's notes. He suggests that the story fictionalises "some conceptions found in Hugh Elliot's philosophical treatise, Modern Science and Materialism (1919)". In particular, discussions of the limitations of our senses and the fact that most solid matter is largely empty space ("it ceases, therefore, to be remarkable that X-rays can penetrate matter and come out on the other side. How should the tiny electrons obstruct their passage?").

I think I found the denouement (shooting Tillinghast's machine with, as noted, a gun that Tillinghast ought to have taken precautions against - classic mad scientist overconfidence I suppose!) only slightly less fortuitous than the lightning bolt in "The Picture in the House" that saves the narrator, and that weakens the story to a degree.

The notion of the creatures living invisibly alongside us brought to mind the "perichoresis", discussion of which comes at the climax of Arthur Machen's "N", but I think this is coincidence, Machen arriving at a similar idea via a different, mystical and religious, route (as a glance at the Wikipedia entry for the word perichoresis more than hints!)

I'm going to have to look up "perichoresis" as it makes me think of a Doctor Who episode I happen to like.

From Beyond is one of those stories that I'm sure I've read but can never remember. I listened to it again and now I'm not sure if I've heard it before or not. Sort of a half deja-vu moment.

I found I was a little disappointed in the ending, I think because the 'reveal' part of Lovecraft's stuff tends to be a bit stronger, or I'm just comparing it to The Whisperer in the Darkness. That whole "it was real because I found/saw/know X" moment felt much weaker.

Anyone have thoughts on the name Tillinghast? I find I like it because it's spoken well, but the two parts sort of reflect the attitudes around the character. "Tilling" makes me think of something little, maybe cute, but generally harmless or silly, sort of like how the narrator marks him as a man of failure in his early studies, with the 'ghast' part coming later when things are suddenly serious. It's like a sharp intake or expulsion of breath, (or for D&D nerds, a nastier than normal ghoul.) It feels like it matches with his statement, (to paraphrase) 'you laughed at me but who's laughing now?'

That could be a thing, too. Not something I heard personally but I can hear it now. I neglected to mention my feel of "Tilling" as being something of a diminutive, in a literary sense, like a pet name for something that would be more serious.

"Till-in-ghast" would fit with "Gill-Man" in Innsmouth, though. That happen often in other places in Lovecraft?