THE DEEP ONES: "The Twelve Apostles" by Eleanor Scott

THE DEEP ONES: "The Twelve Apostles" by Eleanor Scott

"The Twelve Apostles" by Eleanor Scott 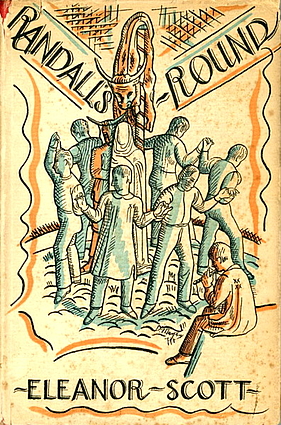 Women's Weird: Strange Stories by Women, 1890-1940
Randalls Round
A Tide of Terror

I'll be lurking. Curious about that title, I keep thinking of the sea stacks off the coast of Victoria, Australia.

It would be too easy to describe this as a mash-up of a Henry James or Edith Wharton-type wealthy American buying an English manor house and finding himself in an M. R. James scenario (the set-up bears a strong resemblance to that of "The Treasure of Abbott Thomas").

However, the introduction to Women's Weird: Strange Stories by Women, 1890-1940 makes a point of stressing how the contribution of women writers to The Weird has historically been undervalued and their original contributions overlooked. So I feel quite bad that I can't actually ignore the resemblances to other works in this story.

I suppose both this and the James story are in fact borrowing from the trope of the treasure hunt, and the detective story - Poe must be acknowledged as their direct ancestor (with the Sherlock Holmes story "The Adventure of the Musgrave Ritual" off to one side as a cousin!).

Although "Folk Horror" is a term of fairly recent coinage it has been applied retrospectively to a lot of much older stories; there are many examples of what could alternatively be termed "Rural Horror". The stories typically turn on the conflict between traditional rural ways, seen as superstitious and backward, and the modern, deemed to be rational. The narrative can take place ad late as the 1970s (the film Requiem for a Village depicts post-WWII housing estates and motorcycle gangs invading the space of an "immemorial" English Village. I had tended to think that the tensions the genre is dramatising stems from the disruptions of the Industrial Revolution, but the treatment of Catholicism here reminds me quite forcibly that they almost certainly go back to the Reformation (or earlier? It sometimes seems as if however far you go back in time, there are people in remote places following "the old ways").

turning back to the story, I enjoyed it a lot. The protagonist is the kind of role that my brain involuntarily casts Doug McClure into; I clearly saw the Amicus version of The Land That Time Forgot at an impressionable age.