THE DEEP ONES: "The Nameless Offspring" by Clark Ashton Smith

THE DEEP ONES: "The Nameless Offspring" by Clark Ashton Smith

First published in the June 1932 issue of Strange Tales of Mystery and Terror. 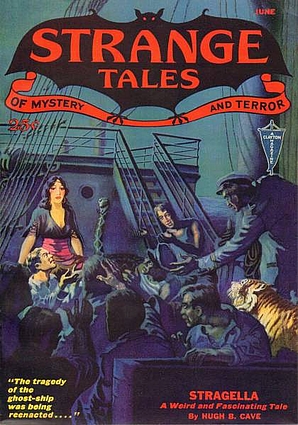 A Vintage from Atlantis: Volume Three of the Collected Fantasies of Clark Ashton Smith
The Emperor of Dreams
The Abominations of Yondo

The Klarkash-Ton Cycle for me.
Pulled from the shelf and bookmarked.

Well, I can't help remarking that the version I read was just filthy with typos.

That aside, the story was impressive for its lack of originality. It was just exactly a Lovecraftian ghoul tale with miscegenation and a little extra dose of the gothic for being set in an English manor house. There was nothing here that HPL hadn't already done in three or four different stories, just joined together differently. Even Smith's usual exotic diction was missing--"apiarist" was about as far-out as that got.

Same here, to a degree. I was actually trying to avoid ticking of the stories this reminded me of or seemed to have been constructed out of - "The Fall of the House of Usher", "The Rats in the Walls", "The Dunwich Horror". I start to worry I've read too many of these stories now, and its getting in the way of simply enjoying them. Like the rock fan who has heard it all before...

The said, though, I did find the premise pretty strong stuff, and it's no surprise that even though it's a Mythos tale, with an epigraph from the Necronomicon, it wasn't published in Weird Tales (HPL is forever bemoaning Farnsworth Wright's editorial timidity in his letters).

Read this in A Vintage From Atlantis and the notes give some background: Smith had communicated the synposis to HPL in a letter and HPL was very enthusiastic. The inspiration was apparently Smith's wish to improve on Arthur Machen's "The Great God Pan". HPL suggested Smith look into a play by Franz Werfel which apparently had a similar (but non-supernatural) scenario (pre The Song of Bernadette and writing for Danny Kaye films.). And Strange Tales editor Harry Bates suggested a couple of changes which Smith accepted - including the ending where the ghoul or half-ghoul is pursued into the crypt but has mysteriously vanished.

On the subject of Smith's vocabulary, I had to remind myself what "adyta" were. I also stumbled over "bee ranch". The term "farm" is used pretty much universally in the UK, whether crops are grown or livestock raised, and I tend to think of a ranch as somewhere where cowboys ride horses and a lot of ropin' and brandin' goes on. Bringing bees into the equation created an incongruously Pythonesque mental image!

Interesting background. I thought the story was a lot more like HPL's "Great God Pan" (i.e. "The Dunwich Horror") that it was like Machen's.

I echo the disappointment in Smith's descriptions: the story read easily enough, but I've grown to expect something more, and I've not read many more of Smith's work than what has been selected for DEEP ONES.

I wasn't bothered by the many parallels to other stories. I had little doubt about where the story was going even if I couldn't place all the borrowed motifs, but it was enjoyable.

The aspect of the story which got to me the most, actually, was perhaps due to my naïveté, though. When Lady Agatha was said to have died 9 months after her disinterment, but only after giving birth to a son, unaccountably my first thought was not the supernatural paternity (which after all had already been mentioned in the excerpt from the Necronomicon), but that Sir John and the Lady somehow felt moved to conjugal relations very shortly after her return from the grave. I was still shuddering at the thought as I read the next two paragraphs and it dawned on me what was meant, and the mixture of both scenarios left an agreeably disagreeable impression that stayed with me the rest of the story.

There were plot holes galore: why not feed the beast before going to bed? Why stay in Sir John's bedchamber at all, rather than move his body elsewhere? Why not attempt to reinforce the wall, if leaving wasn't possible? Why not shoot at the beast from the trapdoor? But I know these are silly questions, the point was to see what would be revealed. Why run away and miss it?

In a 12 December 1931 letter, HPL wrote," By this time you are aware of my delight in the "Offspring". Nggrrhhh. I can still hear the clawing! I think you managed the terrestrial setting very well - indeed, I think your results in that line are always excellent, even though the the process of achievement may not be congenial. For my part, I like to delineate a prosaic earthly setting - & then let the cosmic abnormality intrude."

Nearly a year previous, CAS had described a story idea he had which was inspired by "The Great God Pan". He had already decided at that point to open with a quotation from The Necronomicon. He proceeded to update HPL as to the tale's progress over the next few months, eventually sending it for Grandpa to critique, as he did with so much of his work.