THE DEEP ONES: "The Adventure of the Death-Fetch" by Darrell Schweitzer

THE DEEP ONES: "The Adventure of the Death-Fetch" by Darrell Schweitzer

"The Adventure of the Death-Fetch" by Darrell Schweitzer 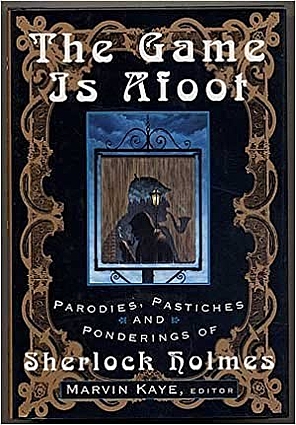 The Great World and the Small: More Tales of the Ominous and Magical
The Improbable Adventures of Sherlock Holmes

ISFDB notes that this story was first published in The Game is Afoot in 1994, but oddly enough they don't include that anthology in their bibliography. This still doesn't mess up our chronological reading order, which lists it as 2001.

Ah, synchronicity: I'm working my way through the Granada television adaptation of Sherlock Holmes, so I'll have a better grasp of Holmesiana than typically I would. Wonder how this will compare with Gaiman's story we read awhile ago.

I thought this was an ok story, a bit surprising that Holmes, unlike most of these crossover stories combining Holmes and something fantastic, that Holmes has no secret occult knowledge nor does he solve the case. Rather, he simply refuses to enter the realm of the supernatural.

I did like the anachronistic reference to Indiana Jones.

I wonder if the winged god idol is a veiled reference to the Hounds of Tindalos.

I enjoyed it well enough.

The fact that the death-fetch was frightened of them when they encountered it on the street seemed to bolster the notion that there was in fact a hoax of some sort in effect. It was a nice feint.

And Leng lore is always fun.

On further reflection, I really like the way Schweitzer embedded the apocryphal nature of this non-canonical Holmes story into its subject matter: the sleuth's failure.

I believe the Granada adaptations to be fairly faithful accounts of Conan Doyle's originals stories, though I have not read any story recently to confirm. In any case, it was fun to see many recognisable tics and character traits appear in Schweitzer's tale: Holmes's abrupt treatment of potential clients, his pounding on the roof of the cab to signal the driver, the references to other cases never fully relayed, the admonishment by Holmes to "give me all of the facts". Even the episode where Holmes asks Watson to tell him what he makes of a sheaf of papers, and Watson gamely identifies the type of paper and features of the writing! They are all "packed in", it's true, so the cadence is wrong, but a pleasure nevertheless to spot them.

>6 paradoxosalpha:
That, too, was a pleasure to contemplate: an expansion of the Holmes casebook. Indeed, Sir Humphrey's backstory suggests a link to the classic tale, "The Sign of Four". Did he perhaps purchase his freedom from one of the culprits of that case?

>4 RandyStafford:
In that same paragraph referencing Indiana Jones, there are other names. (Ben) Gunn I assume to be from Treasure Island, further suggesting Hawkins is the boy (Jim) gone bad; but I didn't catch the allusions (if in fact any were thrown) for Gutzman or Van Eysen. I'm fairly certain characters referred to as "the Malay" and "the Lascar" feature in separate Holmes cases, but can't recall which.

I enjoy most Holmes pastiches. Even if I don't particularly care for the authors work in the main (not the case here, I should make that clear!), if they take on the voice of Dr Watson it usually "lifts" their style for me.

>7 elenchus: those names rang bells for me too but I can't bring them to mind. It's not from The Maltese Falcon, is it? Of course it does put this into the camp of "shared universe", literary conceits like The League of Extraordinary Gentlemen, Anno Dracula, Philip José Farmer's Wold Newton (which I have yet to read), etc. I can understand really wanting to populate Victorian London with these immortal characters...I can remember, as a young boy, being bereft at the thought that the skies over Manhattan were not filled with flying Marvel superheroes.

Holmes' rejection of the supernatural is entirely consistent with his character but of course in the context of this story it diminishes him as there's a whole aspect of reality he shies away from. In other pastiches he does make an accommodation and is able to fight Lovecraftian elementals, or Dracula, to cite two examples.

>7 elenchus:
The Granada adaptations go adrift, in some people's view, towards the end of the run. It's a combination of reasons: reduced budgets, an artistic decision to ginger up some weaker stories with a big dollop of Gothic, but mostly Jeremy Brett's increasing ill health. He was being given oxygen between scenes, for some of the final series.

The 1990s BBC radio one-off plays (the novels) and series (the short stories) with Clive Merrison and Michael Williams constitutes the only dramatic version to have done the whole canon (there were also "further adventures", with Andrew Sachs replacing Michael Williams as Watson, after the latter's death).

Edited - reversed the malicious Autocorrect and "working the main" is now corrected to "work in the main".