The TX Lawsuit and AG Paxton

The TX Lawsuit and AG Paxton

Looks like what Paxton's one hand giveth -- a lawsuit characterized as a "cacophony of bogus claims -- the FBI's long arm of the law giveth in return -- a subpoena served on the office of Texas Attorney General Ken Paxton.

Paxton is under investigation for abuse of his authority for giving legal help to a friend who made substantial donations to his campaign for the office he holds. None of the three sources who confirmed the subpoena that seeks "information" knew how many such were served, nor what information the FBI sought.

Federal authorities are investigating claims by former top Paxton aides that he used his position to aid Austin investor Nate Paul, whose offices were raided by the FBI last year.

The issuance of a federal subpoena on a state agency, and especially involving the state’s top attorney, is a highly unusual move that likely would have required higher level approval from the U.S. Department of Justice.

The allegations about Paxton surfaced in October when the former top officials (and members of his staff) issued a letter to Paxton saying that they asked federal law enforcement authorities to investigate allegations of improper influence, abuse of office, bribery and other potential crimes.

Mr. Paxton's timing for raising his head above the level of the Texas blue bells is poor, obviously. But one can understand that he doesn't get to choose his own time when his a$$ belongs to Daddy the Don. If Paxton wants that pardon that Trump is dangling in front of him, he has to ask, "How high?" when Trump says, "Jump!"

No one reading this post really needs to be told the obvious, but here goes. The crimes alleged against Paxton and Nate Paul bear a remarkable resemblance to the behavior the Orange Shitegibbon is engaging in now. Only the name of the "friend" has changed.

More of the same from the swampmonster.

How are you? I am fine. But I have a question for you.

If you were taking a case on which your entire future depended (the "big one," according to Trump) to the SCOTUS, would you choose for your lead lawyer representing you the only corrupt attorney general under investigation by the FBI who had just been served a subpoena in a search for information of allegations of improper influence, abuse of office, bribery and other potential crimes?

How does Don the Con think this will look to the Supremes? Has he no self-awareness at all, or does he think of Paxton as a real soul-mate and like-minded pal?

>3 Limelite: I'm fine, thanks for asking.

Was there any choice? It looks like every other possible lawyer has turned their backs to him.

The lawsuit, brought by Texas Attorney General Ken Paxton, was joined by 17 states, more than half of Republicans in the House of Representatives and Trump. It sought to invalidate millions of votes cast in Georgia, Michigan, Pennsylvania and Wisconsin. All four states were carried by President-elect Joe Biden.

Seventeen Republican attorneys general and 126 members of Congress joined Texas and President Donald Trump in urging the U.S. Supreme Court to throw out millions of votes.

The court’s order was its second this week rebuffing Republican requests that it get involved in the 2020 election outcome. The justices turned away an appeal from Pennsylvania Republicans on Tuesday.

Section 3. No person shall be a Senator or Representative in Congress, or elector of President and Vice President, or hold any office, civil or military, under the United States, or under any State, who, having previously taken an oath, as a member of Congress, or as an officer of the United States, or as a member of any State legislature, or as an executive or judicial officer of any State, to support the Constitution of the United States, shall have engaged in insurrection or rebellion against the same, or given aid or comfort to the enemies thereof. But Congress may, by a vote of two-thirds of each House, remove such disability.

Basically the Supreme Court gives Trump and Paxton the middle finger. They are clearly not interested in overturning the election.

Time Is Trump's Enemy. . .Along with His Supreme Court Appointees

Prior to the blockbuster SCOTUS decision, WI was embroiled in fighting Republican attacks against the vote in two of its counties. Today, a federal judge slapped the lawsuit down. Immediately, Trump's lawyers applied to the WI Supreme Court, leap-frogging the Appeals Court.

The state supremes agreed to allow the case to come forward for a hearing, which will take place tomorrow. A decision must be reached prior to noon Monday when WI governor and electors meet to ratify the state's results.

Electors meet in their respective states to cast their ballots for president and vice president on the Monday after the second Wednesday in December.

In every state except Nebraska and Maine, electors vote on a “winner takes all” basis, meaning whichever candidate wins the state’s presidential race receives all of the state’s electoral votes.

The House and Senate convene for a joint session on Jan. 6 to count electoral votes. Pence presides over the process as president of the Senate and announces the results. The candidate that receives at least 270 out of 538 electoral votes becomes the next president.

Any objections to the electoral votes must be submitted in writing and signed by at least one House and one Senate member. If an objection arises, the two chambers consider the objection separately.
Jan. 20 — Inauguration Day

“That’s a terrible, terrible mistake. These facts will remain an open sore in our history unless they don’t get resolved. They need to be heard, they need to be aired and somebody needs to make a decision on whether they’re true or false and some court’s going to have the courage to make that decision.”

That's life in the Real World. Giuliani has the same problem people who pray for outcomes they want, or for something they desire but don't get to have. He and they can't take "no" for an answer.

Giuliani creates a fantasy story to justify his lack of legal standing, his ignorance of the law, his inadequacy as an advocate, his living on Planet Zork with Trump, and his desire to demean the judges whose decisions have all gone against him and Trump's nonsense.

He seeks vengeance for being told no. He invents a case of "lack of courage" that doesn't exist in the courts that have unanimously (the technicality crap is not a courtroom victory for Trump's complaint) found his grievance plays to be an embarrassment to the law and an abuse of their courts.

Giuliani and Trump have humiliated themselves with the same kabuki act repeated over and over, behaving according to the definition of insanity. And every single time they've been told that their grievance is "without merit."

Contrary to what the Fool-Aid drinkers think, being without merit is not a decision that is arrived at because the judge lacks courage. That's more nonsense and apparent proof that Trump appointed sniveling cowards to the federal benches at all levels. And Moscow Mitch has been complicit in confirming all those sniveling cowards.

The courts' decisions were arrived at because the Mad King's litigation is coming before the judges without any evidence, sans proof, sans facts, sans knowledge of law, sans logic, sans basis, sans foundation, sans support, sans reason, or -- in a word -- merit.

No wonder Der Spiegel made Trump "LOSER of the Year" on its cover. He certainly earned it.

Who would have thought that the guy with 74 million votes didn't beat the guy with 81 million votes. What has the world come to....and is this a representative democracy? where the guy with 81 million voters beats the guy with 74 million voters? Unfuckingbelievable! Everyone knows that 74 is a better number than 81 (a bad number) in every way. It is both lesser and more. It is both higher and lower. 74 in fact is the luckiest number in the universe. When you have 74 million voters you are at the top of the world....the apex of everything.....practically next door to God....so close in fact that you can reach out and shake his hand.....or her hand....or it's hand if God has a hand....if it's not a wing......and the Justices on the Supreme Court.....6 (a bad number) of whom call themselves conservatives......3 (another bad number) ingrates of whom Donald put there to do the thing they were supposed to and then don't do it.....and after all of Rudy's hard work.....who was almost caught with his pants down. These Justices call themselves conservatives when they're RINO's one and all....even Clarence and Sammy.....wouldn't hear a word of Donald's wise words written on paper with someone else's hand and instead gave us all the middle finger......this is not what friends are for......if anyone gives anybody the middle finger that's Donald's job. They were supposed to work for him......he owns them and that's how they treat him.....what has the world come to?

Trump's Cheesy Lawyers Melt Down in the "Cheese State"

All my posts these days could easily have been titled the way I've titled only one of them -- "A Confederacy of Dunces." In that vein, let's see what today's news brings us on the subject of the remaining Paxton-Trump ancillaries.

Remember WI? Idiot Republican lawyers jumped over the Appeals Court because they didn't like the federal court's judgment of "no." As in, your lawsuit has no merit. They jumped the tar pit and landed in the mouth of the volcano named Justice Jill Karofsky, newly elected in a bitter battle, to the WI Supreme Court.

So far we've seen the 50 cases (or thereabouts) Trump has bullied the court with get his lawyers variously "humiliated," "admonished," "schooled," and "slapped down." Today, Trump's campaign lawyer, Jim Troupis, got crucified and eviscerated. He was repeatedly interrupted by Justice Karofsky.

. . .who pointed out that all the votes the campaign is targeting came from areas with a large nonwhite population. The effort, she added, “smacks of racism.”

(Justice K. interrupts) “All the will of all the voters, including the will of the voters in Dane and Milwaukee Counties, count, am I right?”

Justice Karofsky says that these two out of 72 counties have been “targeted” because of their “diverse” populations.

“This lawsuit, Mr. Troupis, smacks of racism,” she declares.

“This is not normal.”

(Justice K. -- not so fast, little man) Justice Karofsky: “I am very interested in knowing one person in Milwaukee County or one person in Dane County who engaged in election fraud.”

Troupis' argument came down to, "I go nothin' you honor. I'm just here for the fee." Justice Karofsky's opinion came down to, "Your lawsuit has no merit. Thank you for making this so easy. Don't quit your ambulance chasing job."

In the courts, Trump's challenge that the 2020 election was stolen from him, all met the same fate -- failure. Of course. You thought it could be otherwise? 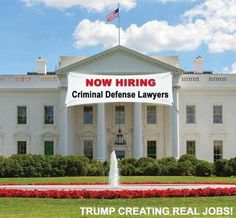