What books will/should be in the Trump Presidential Library?

What books will/should be in the Trump Presidential Library?

I admit to hijacking another thread with this so before it gets out of hand, here's a dedicated thread, Have fun with it.

>2 KAzevedo: I don't think Trump is very creative, to be honest.

Let me see if I can find some additional appropriate books. How about this one?

NEW YORK TIMES BESTSELLER • As seen on The Daily Show: an illustrated portrait of the Donald J. Trump Twitter account, with analysis and “scholarly” commentary from the writers of The Daily Show and an introduction by Trevor Noah

In June 2017, just steps from Trump Tower in midtown Manhattan, The Daily Show with Trevor Noah opened The Donald J. Trump Presidential Twitter Library, a 4,000-square-foot museum space that gave the 45th president and his amazing Twitter legacy the respect they deserve. In the single weekend it was open to the public, the Library pop-up drew 7,500 visitors and had to turn away countless others.

But the Presidential Twitter Library experience should not be limited to the elite coastal few. Not fair! All citizens, even the Mexican ones, should have the chance to see Donald Trump’s tweets in their rightful context—organized and commented on in the fearless, hilarious, insightful voice of The Daily Show.

This one-of-a-kind exhibition catalog presents the Library’s complete contents, including:

• The Masterpieces: In-depth critical appreciations of history’s most important Trump tweets, from “Very Stable Genius” to “Covfefe” to “Trump Tower Taco Bowl/I Love Hispanics!”
• The Greatest Battles: @realDonaldTrump’s brutal Twitter campaigns against fellow Republicans, Diet Coke, women generally, and Kristen Stewart specifically
• Sad! A Retrospective: a compendium of the many people, events, and twists of fate that apparently made Donald Trump feel this human emotion
• Trumpstradamus: DJT’s amazing 140-character predictions—none of which came true!
• The Hall of Nicknames: the greatest of Trump’s monikers, from “Lyin’ Ted” to “Low I.Q. Crazy Mika,” accompanied by original caricature artwork
• Trump vs. Trump: You’re going to want to sit for this one. Donald Trump has sometimes been known to contradict himself.
• Always the Best: the greatest boasts of the greatest boaster of all time, ever!

Comprising hundreds of Trump tweets, and featuring a foreword by Pulitzer Prize-winning historian Jon Meacham, and even a place for readers to add their own future Trump tweet highlights—because he is making new Twitter history literally every day—The Donald J. Trump Presidential Twitter Library is a unique portrait of an artist whose masterworks will be studied by historians, grammarians, and mental health professionals for years to come.

Let's see.
A Day in the Life of Marlon Bundo by Jill Twiss
Whose Boat is this Boat by Donald J. Trump et al.
Sh*t My President Says by Shannon Wheeler
If You Give a Pig the White House by Faye Kanouse
Donald and the Golden Crayon by P. Shauers
A Child's First Book of Trump by Michael Ian Black
...
Keep it going!

My Amazing Book About Tremendous Me:

>5 MsMixte: Working on getting the last into Overcat. Will take a few days for a touchstone. :-p (ETA nope, forced touchstone. There ya go! My Amazing Book About Tremendous Me)

The first is already touchstoned above. ;-)

>3 MsMixte: I never heard about that...how did I miss it! Of course this exhibit must have it's own wing.

>4 davidgn: The Marlon Bundo story would also be suited for the Pence Alcove.

>3 MsMixte: This collection must be housed in the dedicated Twitter Wing.

Thanks all for helping the evening to go by with a bit of humor.

>11 KAzevedo: It's needed. Tomorrow is going to be rough.

A few more.
Goodnight Trump by Erich Origen
Trumpty Dumpty Wanted a Crown by John Lithgow
You Can Say Anything! by B. B. Larsen
Donald Don't Grab That Pussy by Mike McAllen
Please don't grab my p#$$y : a rhyming presidential guide by Julia Young
Time Out, Donald! by Virginia Sobol
Little Donny Trump Needs a Nap by Matt Maley

Ghostwriters I Have Known by Donald J. Trump

The Bible, or at least a photo of it?

Shouldn't there also be some of Trump's favorite reading materials?

A fitting one for Wednesday:

Science: Abridged beyond the point of usefulness

The holy bible: Abridged beyond the point of usefulness

>1 KAzevedo: Don't be daft, the cretin can't read and he can barely write and then only in crayon!

A few more that come to mind:

...and for all of us who have had to put up with this mess

A special exhibit hall for this kind of list :

Lessons in Deception: How to lie and get away with it by Ramie Tawers Since touchstones seem to be tombstones in re this book, here's the link: Kindle Edition

And I think a reproduction of the original diapered Baby Trump balloon should be placed in the foyer to welcome visitors. (The original is being housed in a London museum.)

Will there be a Meme Wing?

He's probably never read any of these, but just for the symbolic value, shouldn't the library include:

I'm Not Leaving - Carl Wilkens
Please Don't Make Me Go - John Fenton
Me Myself and God - Jeff Roth
The Once and Future King - T. H. White

>28 Limelite: Yes, and there was also a well known statue that should join Baby Trump. Let me see if I can find a picture. Ah, this will work.

So far we have The Meme Memorial , The Pence Alcove, The Children's Hall of Horror, and The Temple of Tweets. The entry, gilded in gold, draped with tasteful Trump and MAGA flags, will welcome worshipers, er, visitors, and Baby Trump and Naked Trump will gaze benevolently down . It's really coming together.

>32 KAzevedo: And don't forget the wall tapestry made up of oversized red silk ties (made in China)!

HATS! Hats!! Where are the MAGA hats going to go? Perhaps in front of the Tie Wall in the Red Room?

There's a statuary hall in the Capitol, so let's have one here as well. Maryland can donate their ex-statue of Roger Taney and so the space can be a repository of other culled statues of similarly great statesmen.

Too bad that Trump et al. sought to destroy the juiciest documents and emails, as his library will be jammed with historians, I bet! Hopefully, there will be copies for those who search.

>34 Limelite: Yes, The Red Repository. Red silk tie tapestry, every iteration of red maga hats, and all else designated red.

>36 margd: We will name you, Docent of Documents.

I would like to be the interior designer. We must have every possible example of the iconic Trump esthetic.

And since he's Prez NoMo, here's a chia pet so fans can make their own DJT -- and style his hair (easy with the scissors there, bud!). 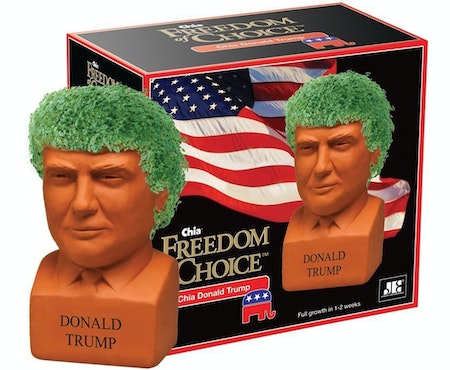 Is it possible to style a combover with chia?

>41 mamzel: You'd have to grow it in the dark, so it gets long and spindly. On the plus side, the planter is already the correct shade of orange.