THE DEEP ONES: "The Inmost Light" by Arthur Machen

THE DEEP ONES: "The Inmost Light" by Arthur Machen

"The Inmost Light" by Arthur Machen

First published in The Great God Pan and The Inmost Light (1894). 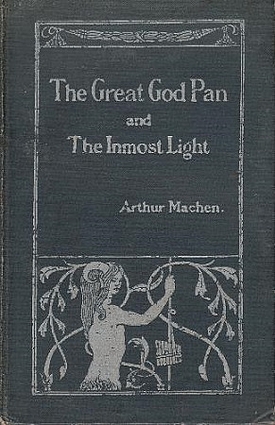 Tales of Horror and the Supernatural for me, although I may also go to The Great God Pan and Other Horror Stories for the notes.

Aside from the positive presence of the preternatural in this story, I felt that Machen's style was very akin to Joris-Karl Huysmans.

So was Dr. Black's wife a creature somewhat similar to Helen Vaughan? That is, could they occupy the same "Pan" universe?

I felt that the story really wanted to on a bit further, perhaps to at least get Salisbury's reaction to events.

Or to some translation or other of Huysmans?

My reaction this time (not having read it for some years) was to bask in the beauty of Machen's prose style through most of it, and then in the final section to be surprised that this wondrous jewel could be destroyed simply by stomping on it...

It seems like they were very similar. The tales were structured differently, and Helen's social status was very different than that of Mrs. Black, but the basic idea of neurosurgically instilled depravity was consistent. The big addition here was the idea that the valuable brain thing could be captured and sustained outside the noggin.

Finally got around to reading this today.

The coincidences were contrived enough I wondered if we are meant to infer the influence of a higher power, but there's nothing that I noted to concretely suggest it.

I did wonder how the lovely Agnes ended up marrying "a man self-absorbed and unsympathetic" and evidently ending up quite devoted to him.

Hm, yeah. Dyson was supernaturally guided to redeem Agnes' soul from the gem. Likely so.

My first reading of this, which reinforced yet again that really -- I must read more Machen. The prose as noted in >5 Crypto-Willobie:, is reason enough, it's simply a pleasure to read the story. But then the hint of layers (links to other stories of Machen's, for one) is another reason. And the humour throughout: the beginning, especially, seemed as though he were poking fun at himself through the character of Dyson, and the "great rewards" of literature.

Are we supposed to infer that Sam and his wife, from whom Dyson retrieves the scrap of paper with the "riddle" upon it, are in fact Dr Black's latter day landlords? I was a little surprised not to have Dyson confirm that, but also impressed that Machen doesn't feel the need to state it explicitly.

Is Paris a center of occult practices, that this Q would travel there, without the opal, presumably in hopes of making contacts there about the results of Dr Black's experiments? And who is this Davies, that Mr Travers mistakes Dyson to be when Dyson shows up to claim the package?

I had thought the story title was borrowed from a phrase familiar from other sources, and tried to look it up & jar my memory. All I found was the title of an album cycle by the band, Current .93. -- which could account for the familiarity, being a band I know fairly well (though not these specific recordings). David Tibet almost certainly is familiar with Machen, but still I wonder if there is not a common referent from which each borrows separately.

>5 Crypto-Willobie: surprised that this wondrous jewel could be destroyed simply by stomping on it

And yet, that is precisely what occurs when we stomp upon that jewel, the human body.

I've been reading a lot of Machen lately and read this one for the first time just a few months ago.

Having worked my way through about two thirds of Machen's fiction, I consider this the only true horror story he wrote. For me, Agnes self-sacrifice arises to pathological levels. It's not mere devotion. She will, after all, have her soul forcibly migrated. Yet, tearfully, she goes along with it. Various forms of evil and their motivations -- greed, revenge, lust -- I can understand. But not this level of suicidal altruism.

>6 paradoxosalpha: Yes, this strikes me as being much simplified version of the basic idea of "The Great God Pan".

>9 elenchus: Yes, I'd like to know what Q was up and how he knew about Black's jewel. There seems to be an interesting untold story here. I almost wonder if Davies is not the same Davies as one of the impostors in The Three Impostors. However, Machen often has the same surnames in his stories, so it probably means nothing.

>7 AndreasJ: Machen often has, especially in the Dyson stories, coincidences. Indeed, Dyson seems to solve his mysteries almost exclusively through coincidences. And, I'll note, Dyson never saves anyone from a horrible fate in any of the stories with him. I almost think, given the aesthetics he outlined in Hieroglyphics, Machen regarded coincidence as a convenient tool to create the mystery and romance necessary for "fine literature".

One one level this does seem like a pared-down reworking of the the themes of "The Great God Pan", and think I remember Machen expressing dissatisfaction that another story wasn't chosen to round out The Great God Pan and The Inmost Light - or it could have been that he didn't have another story that was strong enough, or suitable, ready for print.

Anyway, what struck me this time was that it seemed to contain hints of stories that were to come, as well as echoes of what he had already produced. The figures of Dyson and Simpson are perhaps midway between the West End sophisticates typical of a literary market Machen tried to break with his very earliest short story sales, and the occult detective/proto-psychogeographer types, or indeed the lightly-fictionalised Machen-the-reluctant-newspaperman of later stories. There's also the "London as a modern Arabian Nights Baghdad" idea (borrowed from R. L. Stevenson and given fullest expression in The Three Impostors). And of course the first appearance of Mr Dyson (influenced by Poe's Dupin and Sherlock Holmes I assume. M. P. Sheil's Prince Zaleski, with quarters even more gorgeously decadent and a style of detection even more outré, I don't think appeared until the next year.

I'll never be able to track down the quote or article, but I am sure I read somewhere that, at the time, reviewers had noted the influence of Huysman, but Machen claimed not to have read him at that time. He did have the years creating catalogues of occult books for a slightly shady bookseller, and translating medieval prose (and Casanova's memoirs too, if I have the timeline right) under his belt when he came to write this. That, and his own cast of mind and theory of aesthetics, could explain the apparent similarities.

It may not be true, he was writing decades after the event, but in one of his autobiographical works (Far Off Things) Machen says the seed of this story was the effect that the "raw new London suburbs" taking over the countryside had on him: "the horrid apparition of the crude new houses in the midst of green pastures"..."that once had frightened me, when I was a sorry lad of twenty, wandering about the verges of London."

I very much enjoyed the excuse to read this story again, despite what could be seen as weaknesses and plot holes, and the thematic similarities to "Pan".

>9 elenchus:
I've think there was a belief (true, for all I know) that Paris' occultism was of a specifically Satanic cast. Although Dr Black was (in Machen's mind) an example of the evils of modern science (that's either in Far Off Things or Things Near and Far).

The revulsion at suburban sprawl is palpable, and understandable.

>9 elenchus:, >11 housefulofpaper: a belief (true, for all I know) that Paris' occultism was of a specifically Satanic cast

Again, I am reminded of Huysmans, whose La Bas certainly popularized that idea. There was a fair amount of migration between the occultism of London and Paris, with figures like Anna Kingsford (quite far from a Satanist) conspicuously advancing Theosophical and "Hermetic" doctrines in both. After Machen wrote this story, Golden Dawn founder S.L. MacGregor Mathers would move to Paris and use it as his base of operations at the turn of the century.

I was, perhaps culpably, unaware that Dyson is a recurring character. So there's a whole series of stories featuring him?

Regarding Agnes' self-sacrifice, we only have her killer's word for her consent. I did wonder how forceful his persuasion really was.

>13 AndreasJ: A very good point. We are only taking Black's word for his wife consent.

>12 paradoxosalpha: After Machen wrote this story, Golden Dawn founder S.L. MacGregor Mathers would move to Paris and use it as his base of operations at the turn of the century.

I've only Wikipedia and such ilk as my source, but Machen was a Golden Dawn member? So perhaps the concept of Paris for Machen had more to do with those ongoing conversations than with Huysman's depiction of the city. Or perhaps it's better to surmise, Machen was playing with both concepts, knowing that city had a suitable resonance.

>10 RandyStafford: I'll note, Dyson never saves anyone from a horrible fate in any of the stories with him. I almost think, given the aesthetics he outlined in Hieroglyphics, Machen regarded coincidence as a convenient tool to create the mystery and romance necessary for "fine literature".

I find all of that interesting! Dyson never saving anyone seems part & parcel with that humour Machen showed at the beginning of this story.

Machen was still six years away from joining the GD when this story was first published. He was more likely to have known of Kingsford than Mathers at that time, although he might have been aware of both. In any case, he wouldn't have had an "inside" GD perspective on the French occult scene.