Let's try and get a bit of life here. What are your favorite art and/or art history books? Here are my two:

Raymond Klibansky, Erwin Panofsky, and Fritz Saxl, Saturn and Melancholy: Studies in the History of Natural Philosophy, Religion, and Art, London: Thomas Nelson and Sons (1964). Deep art history from the Warburg Institute in surveying the link of melancholy to the literary and pictorial traditions, the glorification of melancholy and Saturn in Florentine neo-platonism and the birth of the modern notion of artistic genius, and a brilliant analysis of the background, meaning and legacy of Durer's "Melancholia I.".

Denis Mahon, Studies in Seicento Art and Theory, London: Warburg Institute (1947). The beginning of the revival in the appreciation of the Italian baroque and artists such as Guercino and the Carracci.

We only get two choices?

OK, that's doable. I'll just go with my first reaction, kind of like free association. Probably gets to the heart of the matter most efficiently anyway.

1. The Century of Tung Ch'I-Ch'Ang 1555-1636 by Wai-Kam Ho. In China, a scholar painter such as the subject of this book frequently combined his roles of painter, critic, and poet with that of a public official in the Imperial admistration. Consequently, the facts often refuse to resolve themselves into the neat abstractions used when considering the lives of, say Raphael or Rembrandt. We are in a world that basically has no parallel in Western art history until at least the end of the 19th century. As a result, it takes more than one expert to decipher and interpret the maze of available information. To add to the complexity, in China, by the 11th century, long before the period under consideration here, major scholar painters had shifted focus from the simple representation of reality to the formal and expressive elements of style. The tradition was viewed as a complex history of competing styles, a context within which the painter defined (and distinguished) himself. This publication, sponsored by the Nelson-Atkins Museum of Art in Kansas City, involved the collaborative efforts of over 20 scholars and took over 6 years to realize. The result is a multi-faceted and exacting examination of the subject's paintings, calligraphy, criticism and influence, in both his public and private lives. The complex image that emerges is fascinating.
2. The Work of Atget Old France by Eugene Atget. Ansel Adams said it best: "The charm of Atget lies not in the mastery of the plates and papers of his time, nor in the quaintness of costume, architecture and humanity as revealed in his pictures, but in his equitable and intimate point of view. . . . His work is a simple revelation of the simplest aspects of his environment. There is no superimposed symbolic motive, no tortured application of design, no intellectual ax to grind. The Atget prints are direct and emotionally clean records of a rare and subtle perception, and represent perhaps the earliest expression of true photographic art." This first of a 4-volume compendium focuses on the French countryside, the rural roots of the nation, the vital vestiges of which were disappearing even as Atget was busy documenting them.

Jot down as many favorites as you like. Didn't mean to imply a limit.

Visible Music was a book I splashed out on when I shouldn't have so I love it and appreciate it (nearly) daily. Plus, because it's music AND art AND a book, it ticks my top 3 boxes. Shock of the New, and This is Modern Art I also love. Its nearly a year since someone last posted anything here......hello.......anyone there!?

Visible music sounds interesting. I've got a couple of books along those lines, but they're actually more "lp-cover" art -- Blue Note : album cover art and The Greatest Album Covers of All Time. So, in addition to music AND art AND book -- you can add a strong jolt of nostalgia. The odd thing about these two books, though, is that the commentary is mostly about the music and not about the art.

There's something kind of wistful about this whole genre; since cd's are the final generation of a dying breed, the tangible music compilation. Their demise will be taking the jacket and its graphics along with them.

At any rate, welcome to the group -- and thanks for providing the annual posting.

I don't have many art history books, because the ones I want are rather pricey... but I did go ahead and buy (used) one or two that I found within my price range. Of those, my favorite is this one: 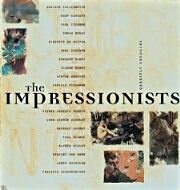 The Impressionists by Gabriele Crepaldi

It has an unfortunate title - and I say unfortunate because there are dozens of other books with the same title, but many are not as well written as this one.

Hi jburlison- Visible Music was published in 2000, it features cover art from Lou Red, Beck, a lot of electronica/rap/musicals (which I'm not that into but I dont mind because the art work is so interesting), compilations, one hit wonders, folk, pop, the Rolling Stones.
Its a great coffee table book (if I had one- a coffee table that is) as it's as easy to flick through as it is to really look at.

Tangible music, I like that. I've tried to resist the download as love to look right through the CD jacket reading and taking in everything. There is a lot of art in music!

Still a favorite of mine: Art and Illusion by E.H. Gombrich. I first read it when I was about 10 - much of it went over my head back then, but it's what made me become an art historian.

And I absolutely love Colour and Culture by John Gage.

Last Summer when the digital signal was introduced and my TV became obsolete I began a new hobby.Creating art with wooden craft sticks;My own impression of Oriental tea lanterns.The classic form is carved in stone. Paul Klee created some line drawings during the Bauhaus year of 1926.Is there a comprehensive collection available with all the line drawings intact?

I love Beverly Moon's Encyclopedia of Archetypal Symbolism. Beautiful reproductions of an art work on a single page with a facing page describing it.

But my favourite art book is Kangra Paintings of the Gīta Govinda. Thick paper pages with tipped in colour plates including metallic gold covered by a page of tissue paper. I have few others of Randhawa's books published by the National Museum of India in the 60's. They are equally beautiful.