We've talked about the love of books, books about books, dictionaries of books... what about books in books?

I've just finished reading The Master and Margarita by Bulgakov in which two stories are presented: the main plot and the book written by one of the characters.

Any others out there?

Oh, you must read The Athenian Murders, by José Carlos Somoza. A text is being translated. A second story is being told in the footnotes. Then they seem to merge. It's a fantastic book!

The End of Mr. Y by Scarlett Thomas is about a book ... called The End of Mr. Y. I'm pretty sure there are extended excerpts. A great book, even if you're not into fantasy, sci fi, alternate reality fiction or whatever you want to call it.

Oh! How could I forget? If on a Winter's Night a Traveler, by Italo Calvino.

Censoring an Iranian Love story contains a love story, the parts that are censored out, and the authors story about writing the story. three for the price of one. Its a good read.

The Mysteries of Udolpho features heavily in Jane Austen's Northanger Abbey. in non-fiction, Musn't Grumble by Joe Bennett follows the trail of H.V. Morton's In Search of England.

The alternate universes encountered in The Number of the Beast by Robert A. Heinlein consist of the favourite books of each of the main characters.

The Book of Sand, if you like your fictional books fantastical.

A Child's Book of True Crime by Chloe Hooper

Babel Tower by A. S. Byatt

Bound for Evil is an anthology wtih 66 stories about books that get their owners or readers into trouble. Hawthorne, Saki, MR James, Fred Chappell, and (obviously) dozens of others. The book is a wonderful physical object, made of fine materials and illustrated throughout. I love it, and am always nudging bookish folks towards it when I can.

Someone must have mentioned, by now, Bradbury's Fahrenheit 450 and its "Book People".

There's a great Rhys Hughes story, "Finding the Book of Sand", in the anthology BOUND FOR EVIL: CURIOUS TALES OF BOOKS GONE BAD. Hughes speculates the consequences of a book story with a touching and memorable ending.

I'm finishing The Killing Circle by Andrew Pyper which includes a story which seeps into "reality", giving the book a mirror-like quality - great trick for a horror story!

The entire Thursday Next series by Jasper Fforde. So much books in books, within books, fun stuff.

The Solitaire Mystery by Jostein Gaarder

The Rule of Four by Ian Caldwell and Dustin Thomason

The Secret of Lost Things by Sheridan Hay

Shadow of the Wind by Carlos Ruiz Zafon.

When I was a pre-teen I read The Orchids and Gumbo Poker Club over and over again. It was set up as Lizzie McGuire reading it for a school assignment and it ahd her notes in the margins and stuff. It was such a great story and thoughts on it by anotehr pre-teen made it even more compelling.

Possession by A.S. Byatt - a wonderful literary romance and mystery with two related stories in different time periods - one about the relationship between two writers and the other about two literary scholars who are studying those writers. An excursion into libraries, archives, manuscripts, diaries, poems and even literary relics. A delightful read!

The Alphabet of Thorn is a fantasy novel about a translator in a library.

I just finished reading 7th Heaven by James Patterson wherein the serial murderers used a book in the victims' own collections' as a clue. They are:

Farenheit 451
Burning in Water, Dancing in Flame
A History of Yachting
Fire Lover
National Guide for Fire and Explosion Investigation *
The Bible, opened to the Book of Matthew **
7th Heaven ***

I'm sure you can surmise from the titles the method of murder was by fire. Except A History of Yachting, but it ties in all the same.

Each book was appropriate to the victims.

This was a refreshing change of pace from Patterson, and it took some effort to get it right.

How about The History of Love, The Book Borrower, The Thirteenth Tale, or The Book Thief?

But What of Earth?: A Novel Rendered Into a Bad Example by Piers Anthony is sort of this way. Its main part is the fictional novel, but in some ways the more interesting part of the book is the essay annotations by Piers Anthony, how the first edition, without his knowledge, had four copy editors and another writer rip his work to shreds, before publishing. An independent reviewer read both the original and the rewritten version and said they were both mediocre novels, but the rewritten was a little worse. I have to agree as to the mediocrity; the non-fiction is much more interesting then the novel itself.

Picture This by Joseph Heller gets its title from a painting: "Aristotle contemplating the bust of Homer", but literarily follows, in part, a recent non-fiction of the time: The Trial of Socrates by
I.F. Stone.

I recently finished Firmin by Sam Savage, a book about a book-loving rat who lives with a science fiction writer.

In Miguel de Unamunoʻs Niebla, the main character is considering suicide, and wants to consult an expert on it. The biggest expert he can think of is the author of the book he is in -- Unamuno.
Unamuno doesnʻt say yes or no to his suicide idea but tells him that he cannot kill himself or anyone else, because he is not real; he is a fictional character.
I donʻt want to give away what is the outcome of that argument, but in the couse of it, the character r eminds M. de U. "You once told somebody who scoffed at Don Quijote as ʻunrealʻ
ʻDon Quijote is more real than you are!ʻ."
Not exactly a book within a book, but making THIS book itself a plot element IN itself.

So I got on the vampire bandwagon, trying to understand the mindset of my future teenage stepdaughters, and tore through all the Twilight books. Wherein our heroine Bella keeps rereading her favorites. She's frustrated with Jane Austen because her heroes share the same or similar names to her vampire lover Edward, i.e. Edmond or Edward or Ed something or other. She and Edward both identify with Romeo and Juliet. While Edward, mystified with why she keeps rereading Wuthering Heights identifies with Heathcliff's desire to drink his rival's blood.

I've finished reading Atonement in which 13 year-old Briony writes the Trials of Arabella a melodrama about a young woman who ends up marrying her medical prince...

I read Mister Pip a while back and really enjoyed it.

I've just finished Beatrice and Virgil by Yann Martel which is rich with literary allusions: it includes a play, eponymous to the novel, and quotes lengthily Flaubert's short story on Saint-Julian - a very curious story indeed, which I'll try to find and read.

I'm reading Vengeance du traducteur by Brice Mathieussent - a book about a translator translating a bout about a translator translating a book. The premise is interesting, but it builds a series of layers which can be rather confusing, especially since the barriers are porous and fictional characters meet "non-fictional" characters. It also stars Dolores Haze, Nabokov's Lolita - definitely a self-referential book, not only about the translation process but also the writing process and the reader/writer relationship!

I highly recommend Lord Byron's Novel: The Evening Land by John Crowley. It's a beautifully written (does John Crowley write any other way?) book about a newly discovered book written by Lord Byron and annotated by his daughter, Ada. The story moves back and forth between the novel and a modern day writer who uses the novel to discover more about the relationship between Lord Byron and Ada and with her own father.

I was startled by this query, as it has been my curse to encounter far too many first works (mostly, but by no means always, novels) by writers who have, it appears, done very little else with their lives except fondle their own precious emotions, write about it, and then indulge their conceit that the world should read their resulting "work". Out of mercy to the guilty, I name no names. This has become a plague in the past few decades with the proliferation of "creative writing" classes, and a veritable industry of writers' covens from Breadloaf to Burkina Faso. Internet publishing has brought the Apocalypse, and right into the ranks of our cherished LibraryThing.
Naturally -- and mercifully -- this doesn't apply to all books within books, and perhaps the best example of this phenomenon in its positive form is also one of the earliest, namely Dante's La vita nuova, in which he explains how the sequence of poems came to be writtten. In much different keys, much of Henry Miller involves the writing life, as does the crypto-autobiographical trilogy by Fr Rolfe, Nicholas Crabbe, Hadrian the Seventh, and The Desire and pursuit of the whole.

How about not books, but the rooms in which they are placed? I have the impression that private libraries often figure in fiction but die out after the Second World War. Yes? No? Examples?

For the purpose of this discussion, what is your definition of a "private library." One idea which comes to mind are book collections owned by individuals. Another is an institution containing books with restricted access to a small group of people.

I am not interested in institutional libraries, though the Philadelphia Free Library has William McIntire Elkins' physical library -- wood panelling, furnishing and all -- within its rare book department. I am interested in domestic libraries --- ideally the ones that were not quite as magnificent as Elkins'. What I want to know is who could afford a purpose-built room, or at least shelves of books within a study, living room, etc., and how such rooms were used, and when. I assume that fiction is one window on the subject.

There was an active blog that is now dormant concerned with book terminology and topics called the Private Library.

As a member of a bibliophile society, the Zamorano Club of Los Angeles, CA, I have had a chance to see some private libraries from members. Perhaps there are similar opportunities in your area.

There is an 1897 book called The Private Library (see Archive.org).

In fiction, one example is the new series by Victoria Abbott beginning with The Christie Curse has a private library of famous mystery authors gathered by a wealthy collector. The protagonist is hired as an assistant to the eccentric collector.

There are no doubt many others.

With 8,200+ books in our collections in a small home, we are also interested with ways in which people live with many books. We have books throughout our home with one room designated as a "library" though not quite the stereotypical Hollywood portrayal of a library (which we admire as well). 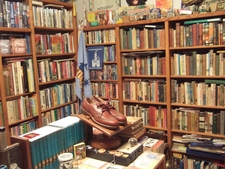 Now that is a book-filled house! Great pics!

Your photos are wonderful; and yes, your library is the kind that very much interests me. You may be interested to know that when one researches "Private Library," (the Library of Congress classification ), one finds much more about book collections-- the books themselves -- than about the rooms in which they were housed. (Ditto, generally, for all the catalogues of book collectors/collections). I just visited Rosenbach's Museum in Philadelphia, eager to see his library.But the fact is he only moved his books here the last few years of his life and I have not found, as yet, photos, of his earlier library that was in the building adjacent. I'll check our Victoria Abbott. Thanks. Susan